Honestly, what in life is better than a food festival? A food truck festival, of course! I firmly believe that food trucks are magical things with magical powers, because I’ve never had anything but truly amazing food from a food truck.

With my usual foodie companion, Julia, by my side I headed to the annual Jersey Shore Food Truck Festival held at Monmouth Raceway Park! We actually went to the food truck festival a few years ago (before the time of The Perky Foodie– otherwise it obviously would have been documented). The last time we went, we got some amazing sandwiches from a truck called the Mustache Mobile and waffles for dessert from NYC-famous Wafels and Dinges– Those waffles still go down in history as one of the best things I’ve ever eaten. Seriously. Since last time was so successful, we had high expectations for this year’s food truck festival!

One truck that we were dying to try last time was The Empanada Guy! The line was crazy long then, but this time we made sure to arrive at the festival early so we’d skip the lines. 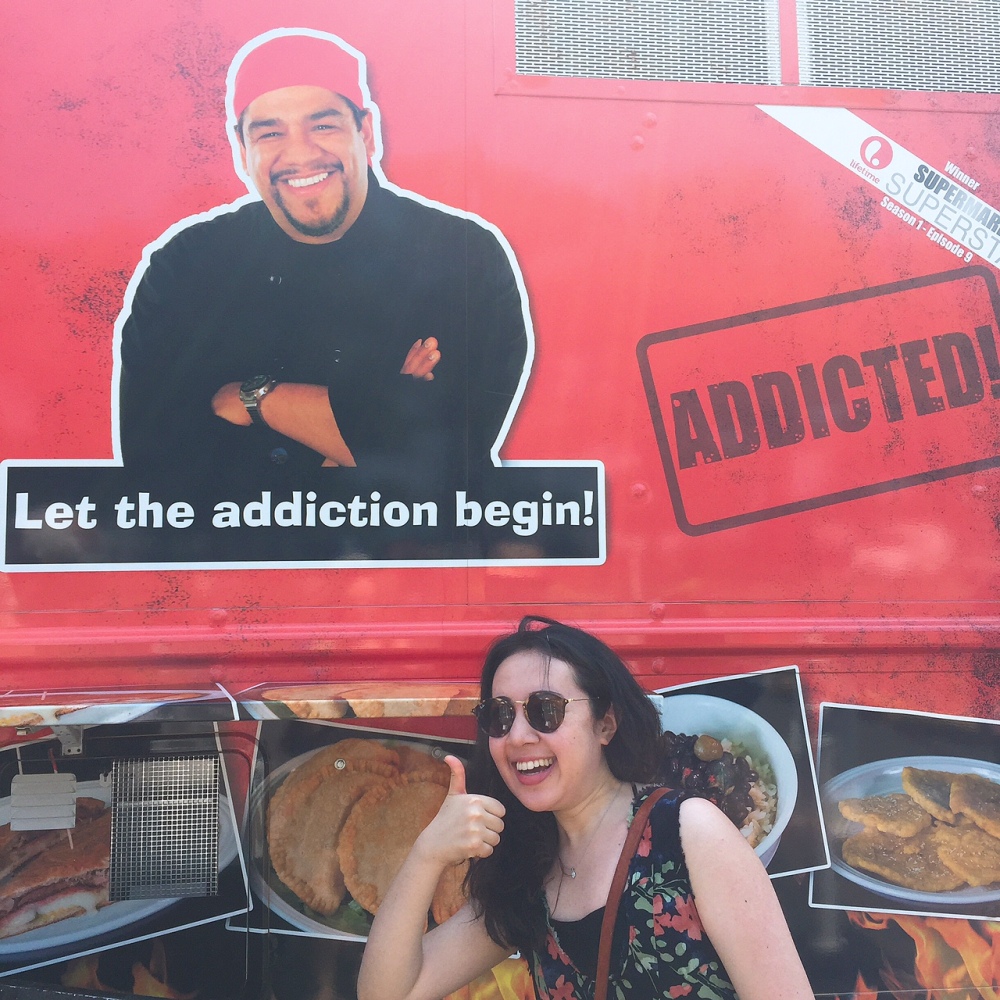 We decided to get a beef empanada and a veggie empanada to share. I actually have only had baked empanadas in the past, so I was surprised that these were fried. And how perfectly fried they were! A crispy, bubbly, golden brown pastry dough held the inside filling like a warm, delicious hug. 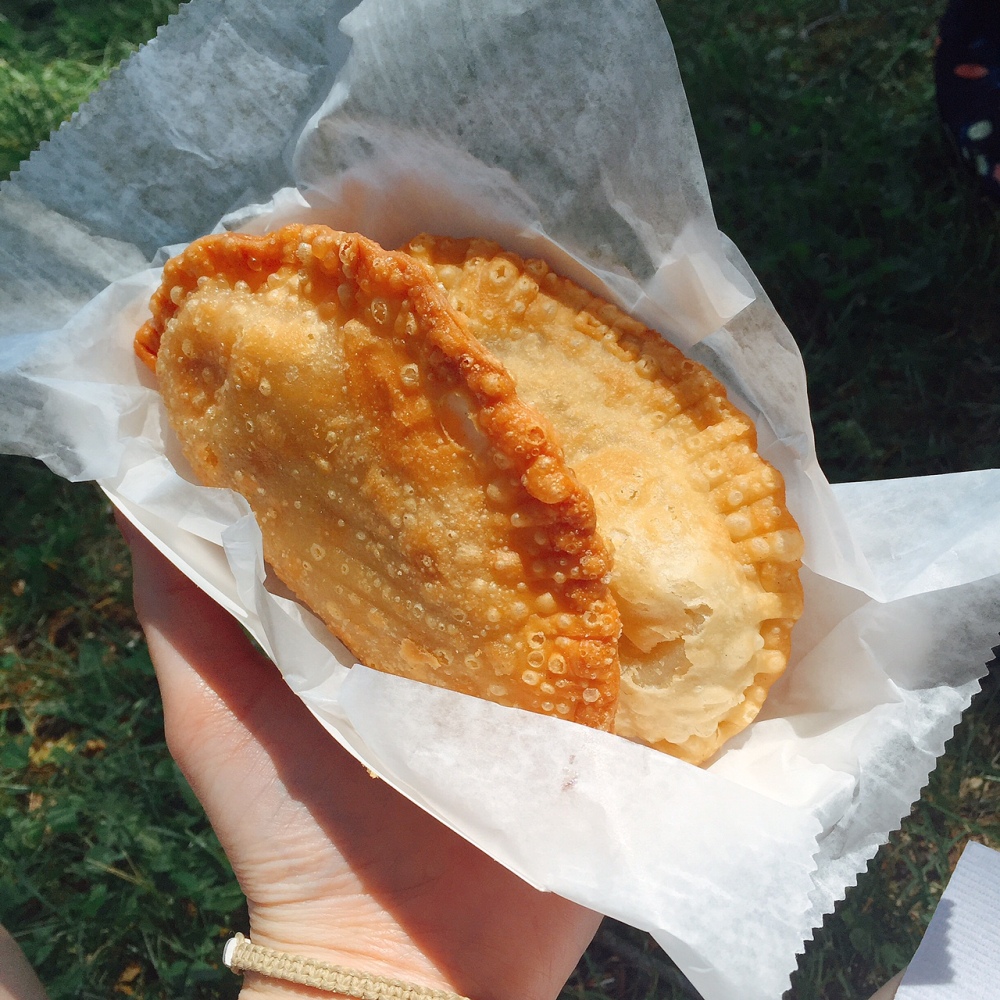 The beef empanada was really just a classic empanada done right. The filling was so flavorful and well-seasoned!

The veggie empanada was actually totally not what I was expecting but in a good way! I was expecting larger pieces of veggies, but the filling was actually pureéd, and the different colors of all of the vegetables melded into a golden, heavenly mixture. It had such a warm flavor with lots of aromatic spices.

Our plan of action when we first arrived at the food truck festival was to walk around and scope out all of the trucks to be sure we saw everything before deciding where to eat.  One of the first trucks we saw when we walked in was My Hola Paella, and after making our rounds, we knew we had to come right back to where we started! I love love love paella. It’s the kind of dish that makes you feel warm and happy all over, and this one certainly didn’t disappoint. We both ordered traditional Seafood Paella.

Tender yellow rice was topped with a super generous amount of beautiful fresh seafood. We’re talking juicy shrimp, baby scallops, and some of the largest mussels I’ve ever seen. Fresh herbs on top brought out all the wonderful layers of flavor in the seafood and rice, and the creamy cilantro sauce served on the side gave the paella a bright zing and a little bit of a kick. Ugh, talking about it makes me miss it. I want this paella back now, please. 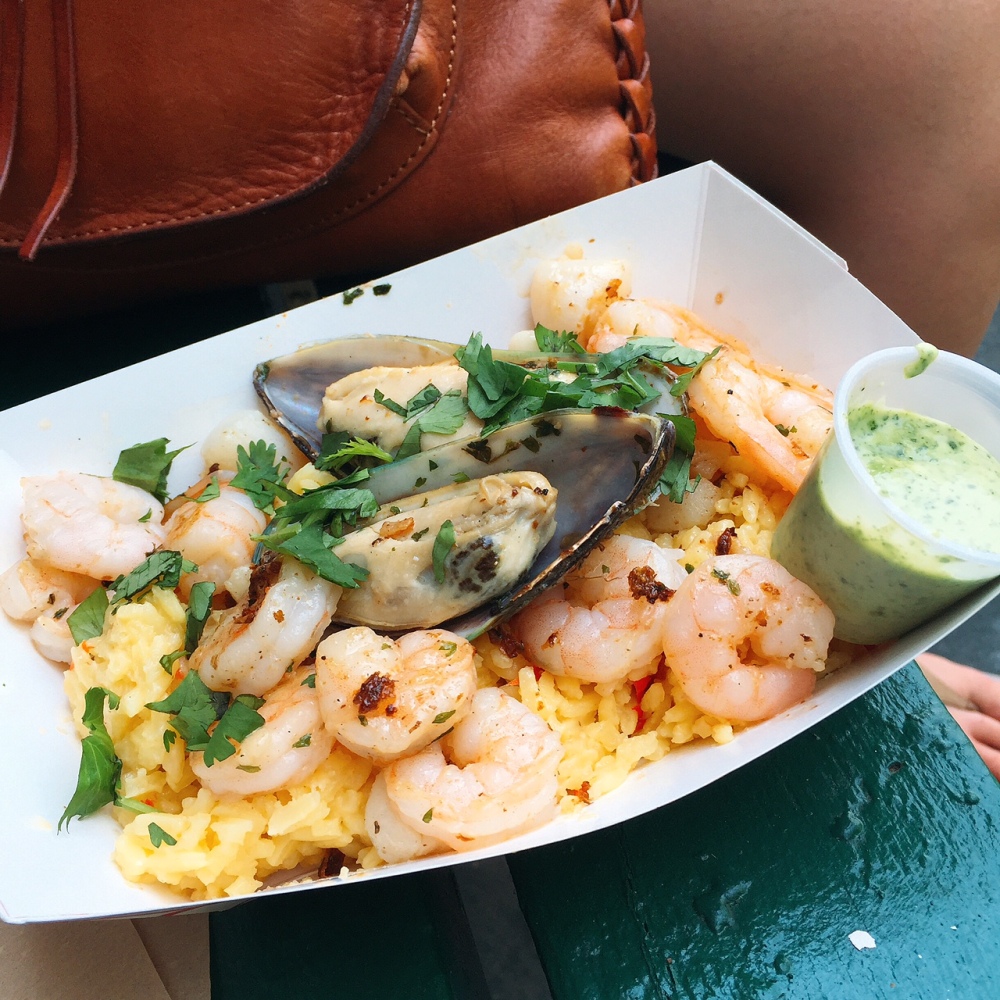 After the empanadas and the paella, both Julia and I felt like we were going to explode. But what kind of foodies go to a food truck festival and don’t get dessert? No matter how full I was, I knew that not getting dessert was not an option. It was also one really hot day, so we knew that even though there were nutella-smothered waffles, lots of cupcakes, and many other desserts to choose from, ice cream was the way to go. We had a few ice cream trucks to choose from, but the one that stood out to us was Luigi’s Ice Cream!

Their specialty is the CreamyBun. A donut…stuffed with ice cream. Don’t hate me. We didn’t get CreamyBuns. We were so full. I’m sorry I’ve failed you, foodies. Next year for sure. Or maybe one day I’ll just trek to Jersey City where they’re located.

Though I kind of regret the fact that we didn’t get this ice cream stuffed into a donut, Julia and I shared Chocolate Brownie Coconut ice cream, so there really wasn’t anything to be sad about.

Intensely coconut flavored ice cream with tons of toasted coconut flakes, chunks of chewy brownie, and lots of little brownie crumbs swirled throughout was the most wonderful treat to end our exciting food-filled day. And it was nice and refreshing in the searing heat, too!

I already can’t wait for next year’s Jersey Shore Food Truck Festival! This year’s was definitely a success!