A few weeks ago, I had the most magical night– at Laura Osnes’s Broadway Disney Princess Party at 54 Below in NYC! If you’re a theatre person, you know that Laura Osnes is basically a goddess, and if you know me, you probably know that she’s my idol. The Broadway Disney Princess Party is a cabaret with lots of very talented Broadway ladies (and guest star princes Zachary Levi and Jeremy Jordan omgomgomg I freaked out) singing Disney princess songs and Princess Laura (Cinderella) hosted and sang so beautifully and just wow it was so wonderful and I could go on and on and even though I could ramble about this forever I won’t because you’re probably here for the food right? Right.

My friend Julia and I met in the city a few hours before our show for  dessert before dinner– because that’s how the real foodie pros do it. If you haven’t heard of the oh-so-trendy Momofuku Milk Bar, you’ve probably at least seen pictures of their iconic cereal milk ice cream on Instagram. I needed to try this for myself! 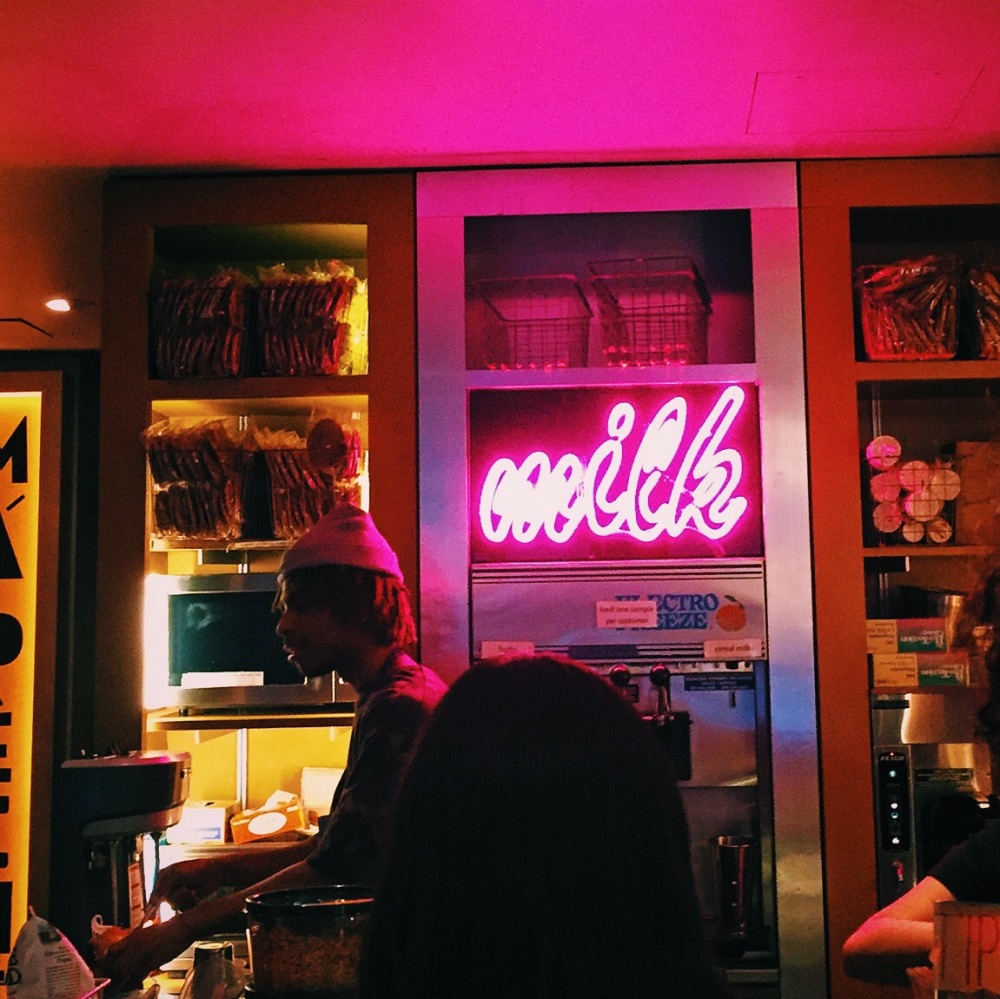 You can’t really tell in the picture, but I actually got a swirl of Milk Bar’s two flavors of soft serve ice cream– original cereal milk and fruity cereal milk.

Christina Tosi, Milk’s creator, crafted this ice cream to taste just like the milk at the bottom of a bowl of cornflakes or fruity pebbles respectively. Now it’s certainly a very pretty sight, but I actually sadly was not quite as impressed as I wanted to be with the taste. I think I just expected the ice cream to have more flavor– I mean it did taste like the milk at the bottom of a bowl of cereal, but it just felt… minimalistic? I’m one for bold, crazy flavors and very sweet ice cream, and this ice cream I guess was just not my cup of tea. I couldn’t really tell the difference in the taste of the two flavors either; the fruity ice cream was only a tad bit fruitier than the original flavor.

While the ice cream itself didn’t exceed my expectations, where this dessert excelled was in its topping– golden, crispy, butter soaked cornflakes. The ice cream’s edges were rolled in this salty sweet cereal, and I was pleasantly surprised to find that there were even more cornflakes at the bottom of the ice cream! That was the flavor I’d been hoping for all along! By the time I got to the end of the cup, the ice cream had redeemed itself– I just wished I could have been this in love throughout my full ice cream experience.

Well, if nothing else, I got some very nice artsy pictures. 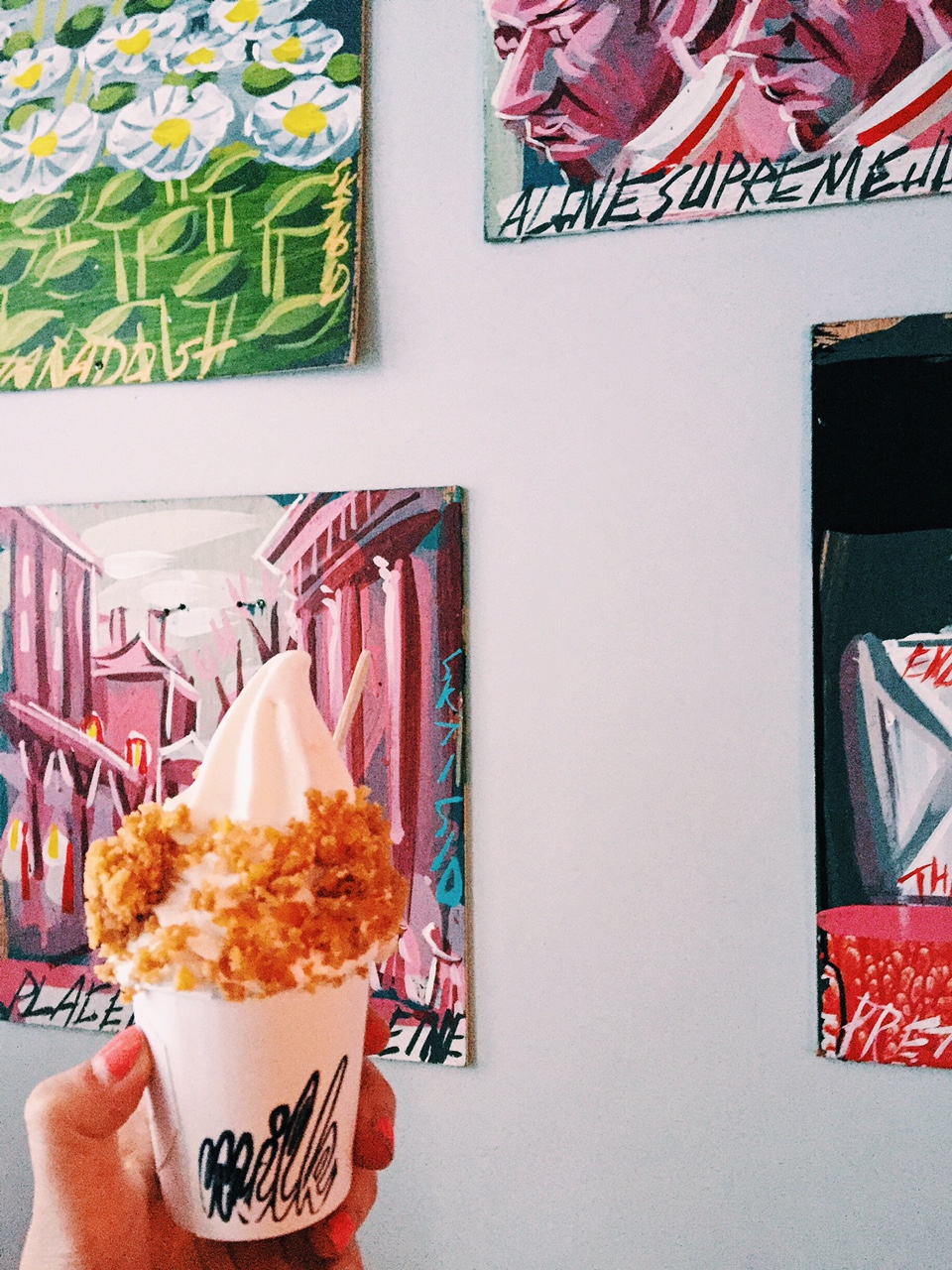 I also got some cookies to take home and share with my family! One was a Cornflake Chocolate Chip Marshmallow Cookie, and if you think that’s a mouthful, I also got the Compost Cookie which included pretzels, potato chips, coffee, oats, graham cracker, butterscotch and chocolate chips! 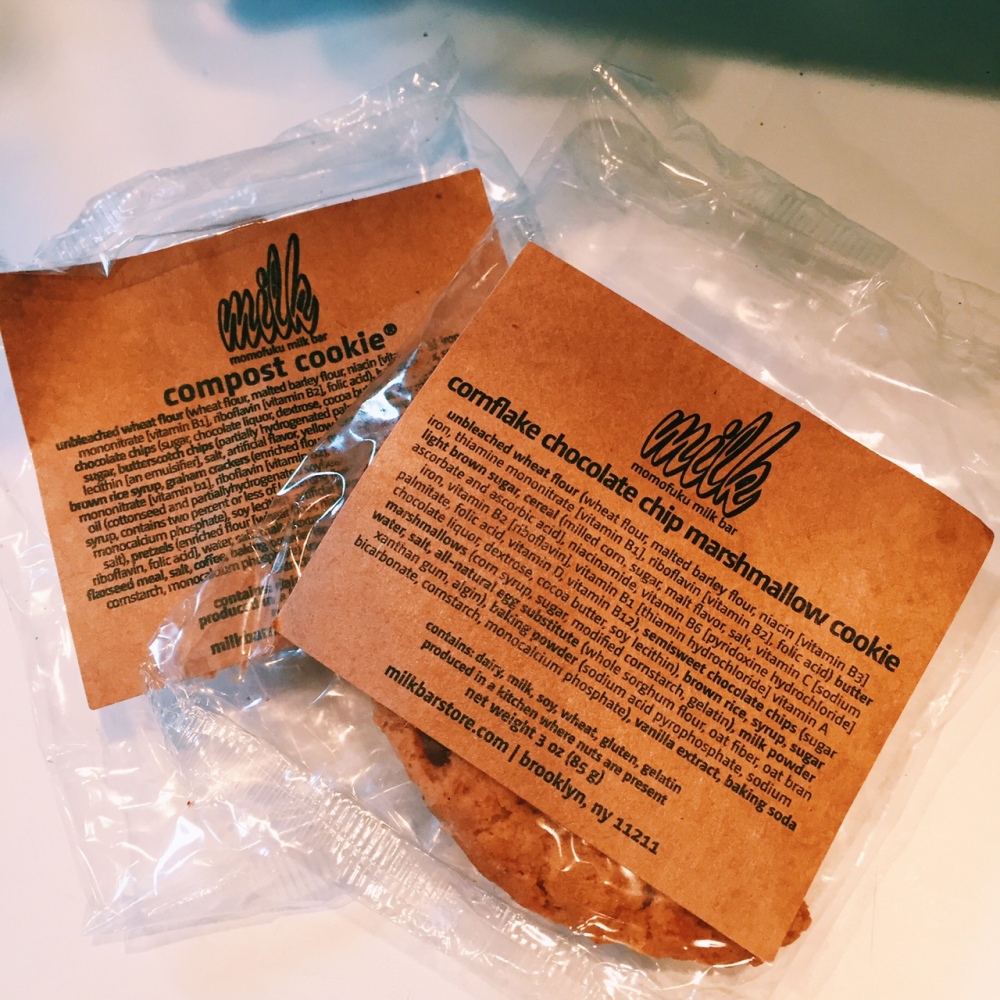 Both cookies were so yummy! I loved how the Cornflake Marshmallow cookie reminded me of a rice crispy treat in cookie form with its ooey gooey marshmallow and cornflakes instead of Rice Krispy’s! The Compost Cookie, needless to say, had a lot going on, but I loved it! It was salty and sweet and everything in between!

After Milk Bar, off we went to 54 Below we went for our evening of sparkly magic, princess songs sung by some insanely talented Broadway singers, and delicious food! Feinstein’s 54 Below, “Broadway’s Supper Club” is a very elegant dinner theater a few blocks away from Times Square. Dinner and theatre– my two favorite things! It was so exciting to finally actually be there, considering the little theatre nerd I am; I spent a large portion of my middle school/high school life watching countless videos of my favorite Broadway stars performing in this very venue on the very stage I sat mere feet away from.

The space was smaller than I expected, and I loved how intimate it felt. The decor gave 54 Below the ambiance of a classy 20’s speakeasy– but in honor of the Broadway Disney Princess Party, the stage and restaurant looked like the princess section of Party City exploded, raining down sparkly princess confetti, colorful princess balloons and streamers, and many more delightfully tacky Disney princess-themed items as far as the eye could see. It was wonderful.

My only qualm with 54 Below is that we found out after checking online the night before our show that there is a $25 minimum for food when you see a show. I suppose that’s NYC for ya. I was a bit disappointed that the dinner price was not included in the ticket price, but it ended up being worth it because the food was absolutely delicious!

I ordered the Braised Short Rib served with cauliflower and polenta. The beef short rib was so tender, I barely needed a knife to cut it. If beef ever could have a buttery texture, it was this piece of short rib right here. Glazed in a savory au jus and topped with a tomato relish, it could not have been more perfect. The short rib was served over a creamy polenta and beautiful multi-colored cauliflower with shisito peppers. This meal made me feel elegant and definitely satisfied.

Julia ordered Citrus-Glazed, Pan-Seared Scallops with Parsnip Puree and Shiitake Mushrooms, and it was just so beautiful and looked absolutely delicious as well! 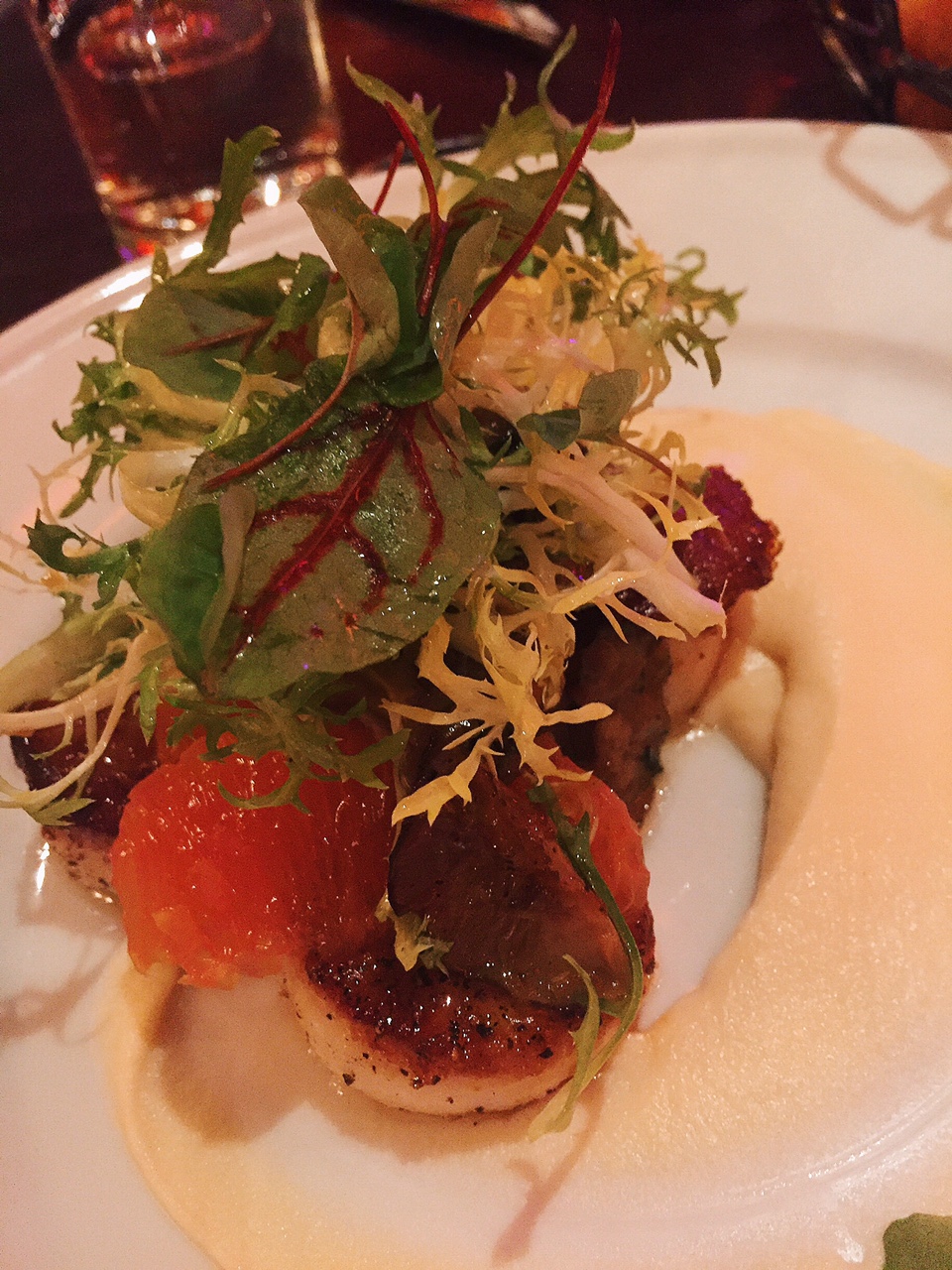 What a “Lovely Night” it was! (Ha, get it? Because Laura Osnes played Cinderella on Broadway and that’s a song from the musical!! I know, I’m hilarious!) The performance and the food left me smiling from ear to ear, singing along and wishing I was a Broadway Disney Princess, and dreaming of delectable food all night!