My friend Melissa’s Snapchat story always seems to have a steaming bowl of some variant of Asian soup on it, and I’ve decided that’s the kind of life I’d like to live, so of course I had to try Ippudo Ramen, knownas the best ramen place in the city!

The ~pillowy~ buns were a lovely cushion for fried chicken in a tangy and slightly sweet barbeque-esque sauce and a piece of crisp iceberg lettuce! 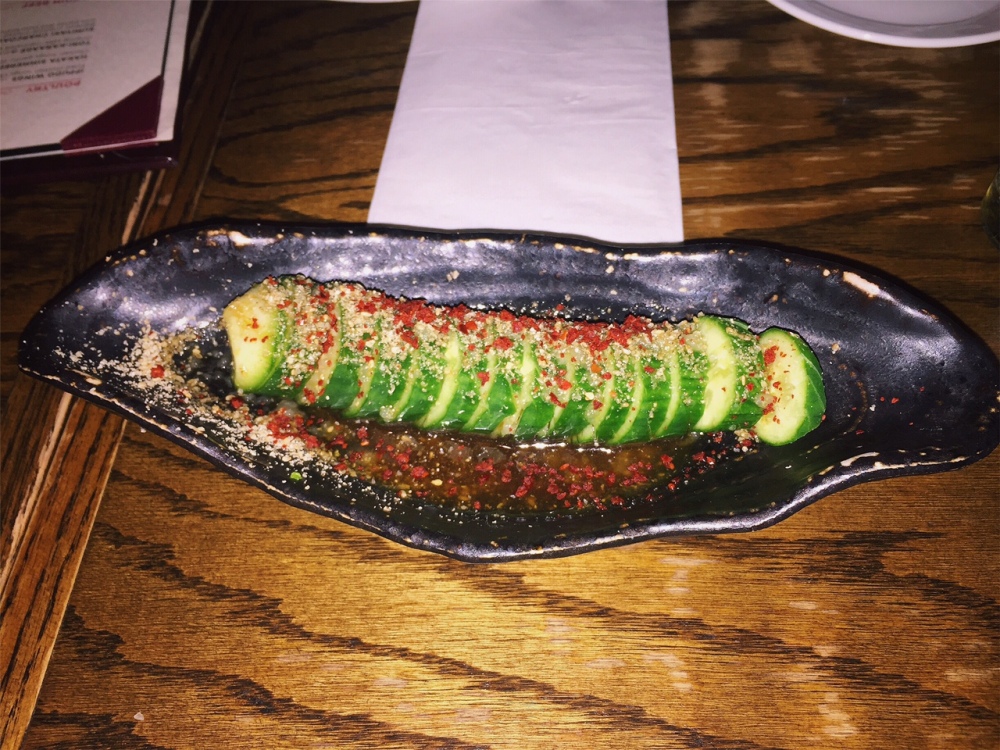 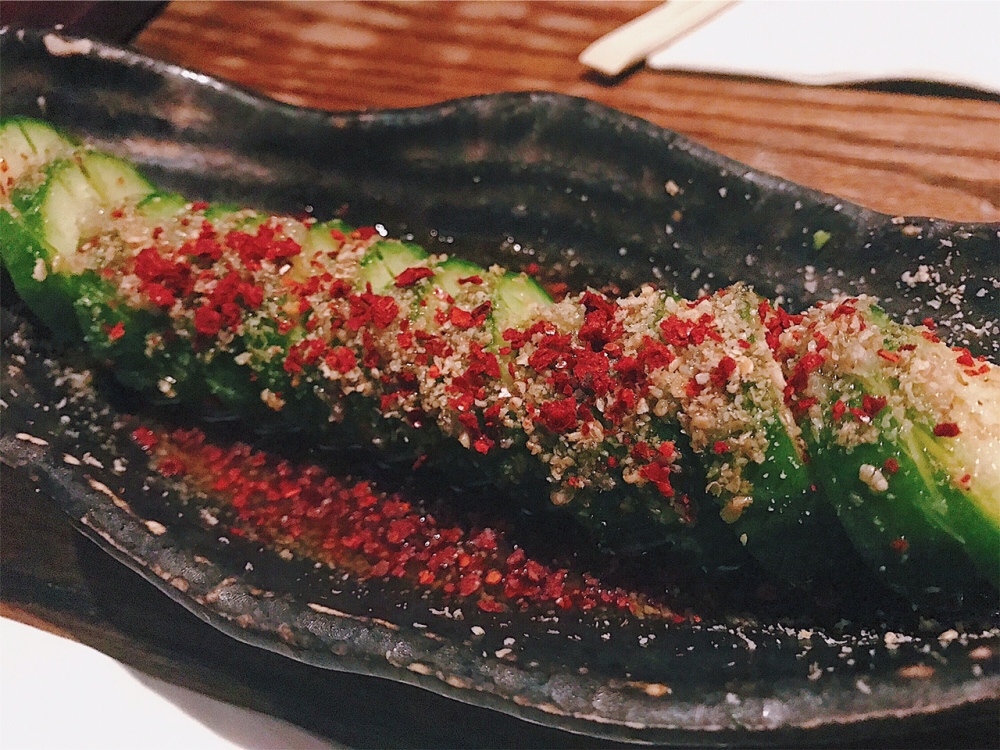 The fresh, crunchy cucumbers were drizzled in Ippudo’s sesame oil sauce and sprinkled with.. Something red? I don’t know but whatever it was, it was magical. 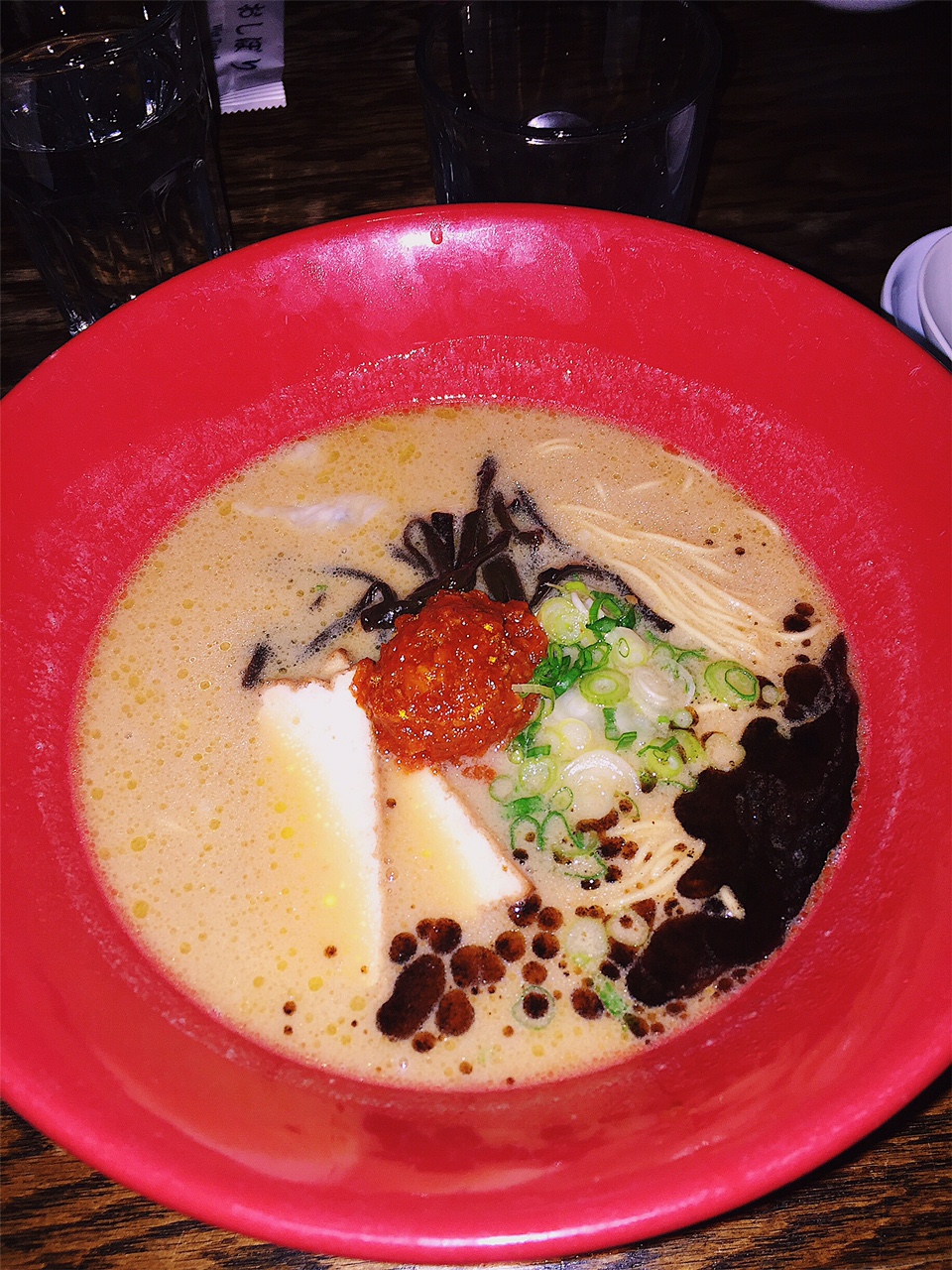 Many of the ramen dishes served at Ippudo are made with pork, but since I don’t eat pork, I was happy to find that Ippudo’s brand new, expanded menu includes many options without it! Ippudo’s most popular bowl, Akamaru Modern, recieved a vegetarian twist in its new counterpart, the Akamaru New York!

Slightly spicy red Umami Dama miso paste, aromatic garlic oil, and the earthy sesame-based broth mingled and melded when I stirred them all together with my giant soup spoon to create so many layers of rich, intense flavor. It was topped with thin cutlets of fried tofu, cabbage, scallions, and kikurage mushrooms. Then, a plentiful spool of house-made noodles awaiting the perfect slurp– which I was taught is accomplished by getting a little bit of everything into the spoon with the help of carefully wielded chopsticks. It was a bowl clearly made with a whole lot of love and care.

For dessert, we went to the place that literally started my NYC Foodie Bucket List*, Spot Dessert Bar! I was so pumped to try these widely Instagrammed, legendary desserts. And let me tell you– they were WORTH THE HYPE.

Spot offers a Dessert Tapas menu, ideal for sharing with friends, so we ordered three desserts to share– the Chocolate Green Tea Lava Cake, the Golden Toast, and the Cookie Camp! 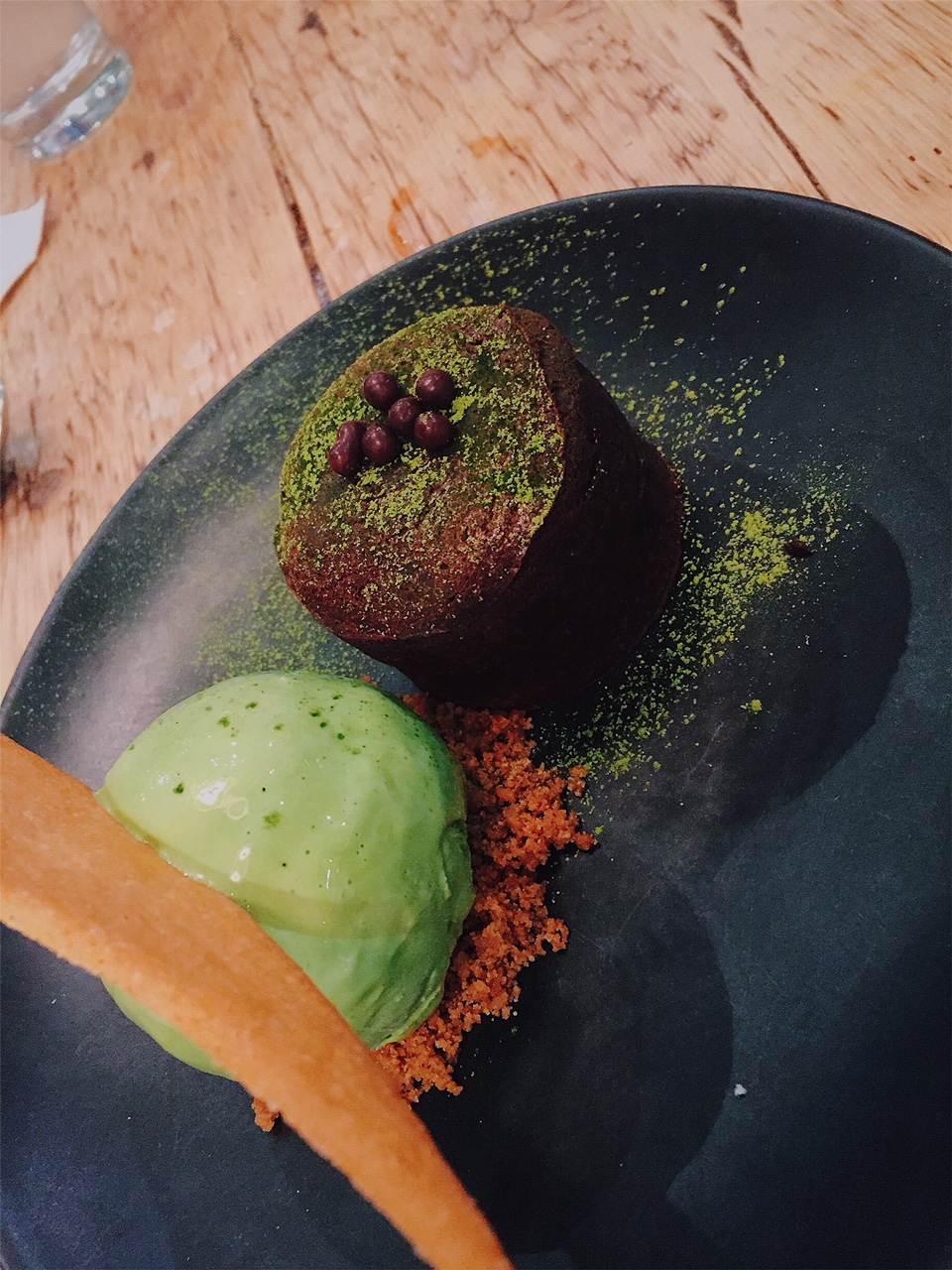 The Chocolate Green Tea Lava Cake is probably Spot’s most iconic dessert, and it was absolutely everything I hoped it would be. 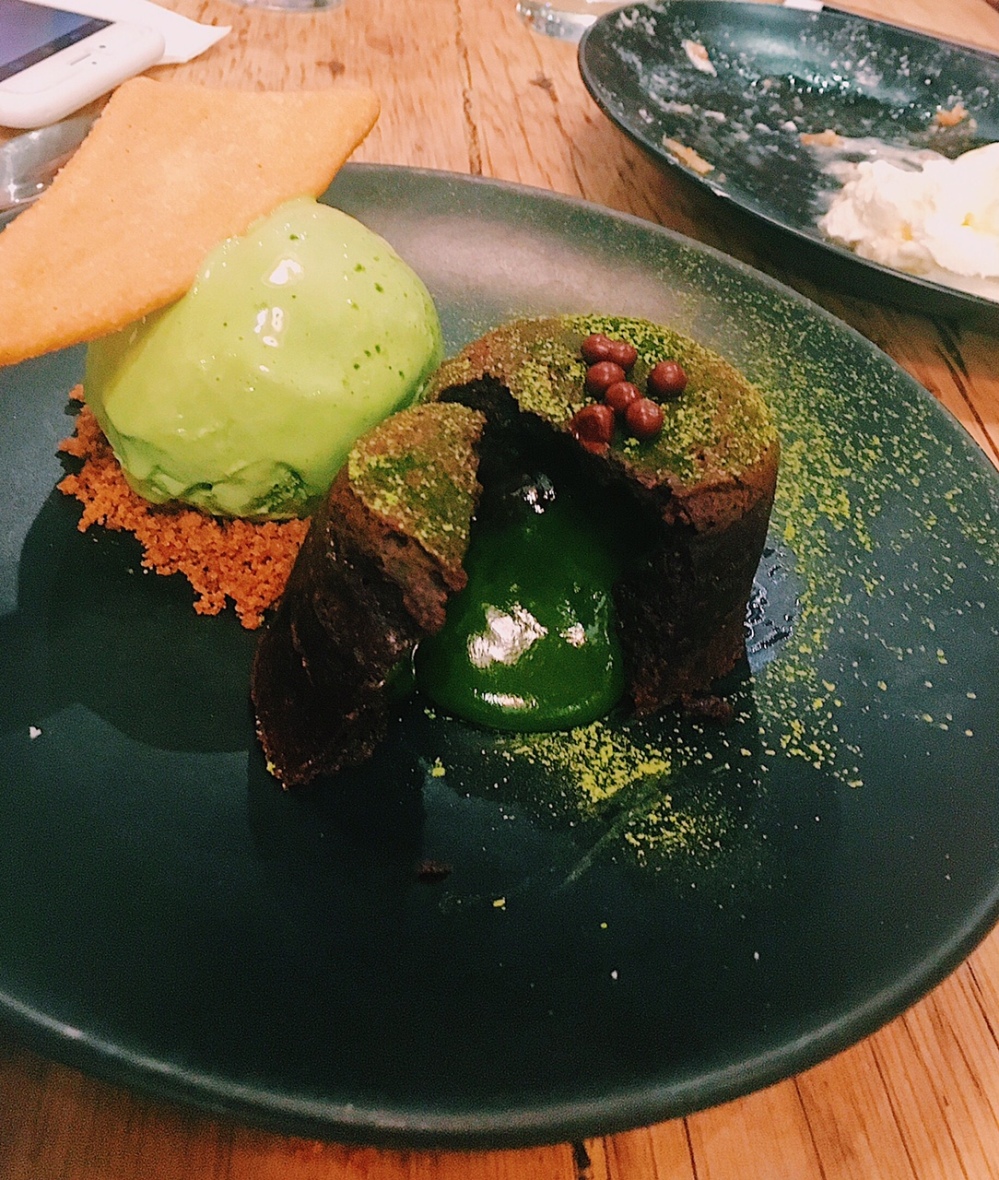 A spoonful of the rich, brownie-like cake, combined with the unique green tea bliss that was the cake’s filling was just pure perfection when it was cooled down by a dollop of refreshing green tea ice cream.

The Golden Toast is another one of Spot’s most renowned desserts. 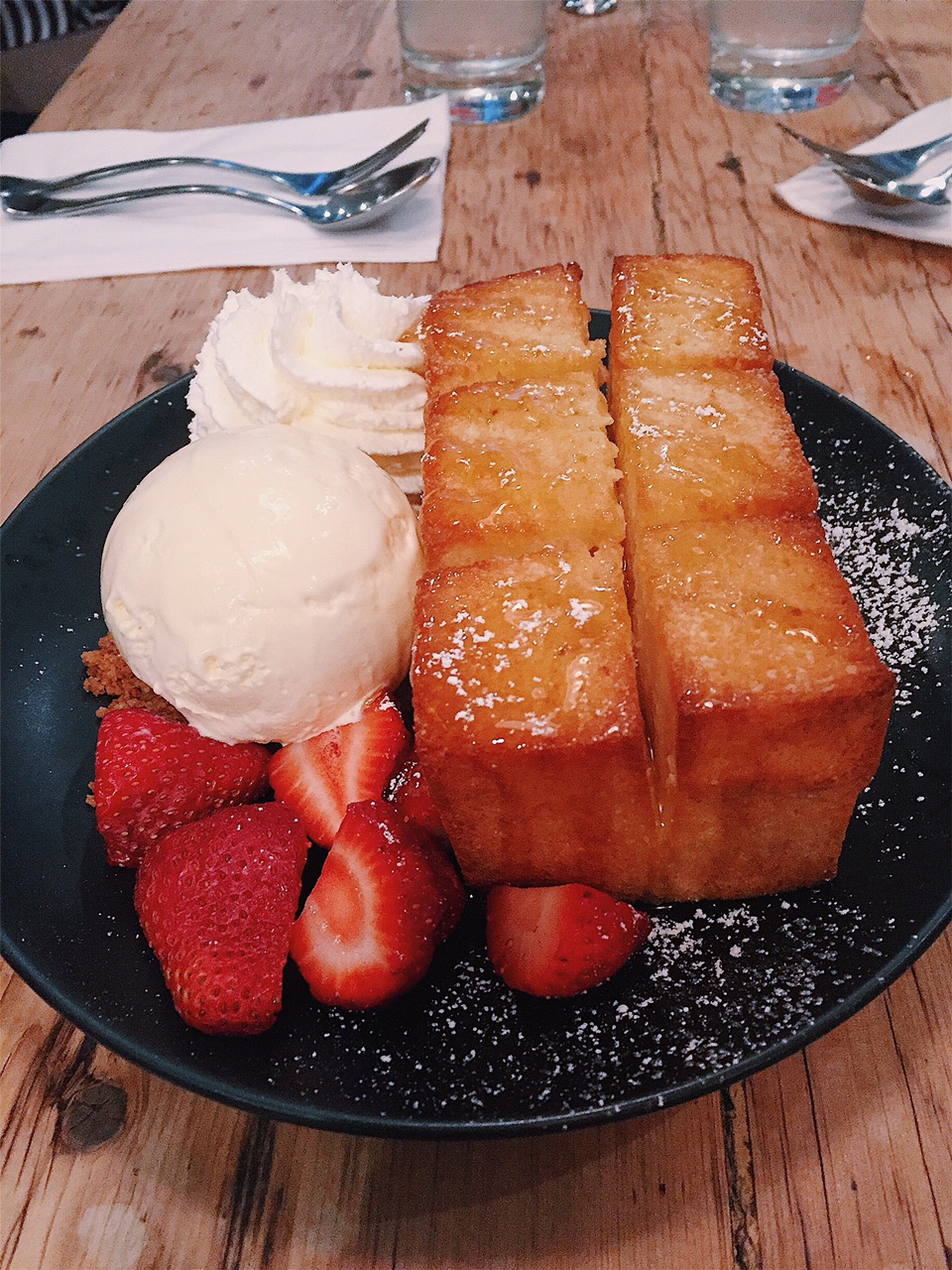 The buttered toast was doused in sticky sweet honey and lightly browned so that it was crisp on the outside and soft and chewy on the inside. 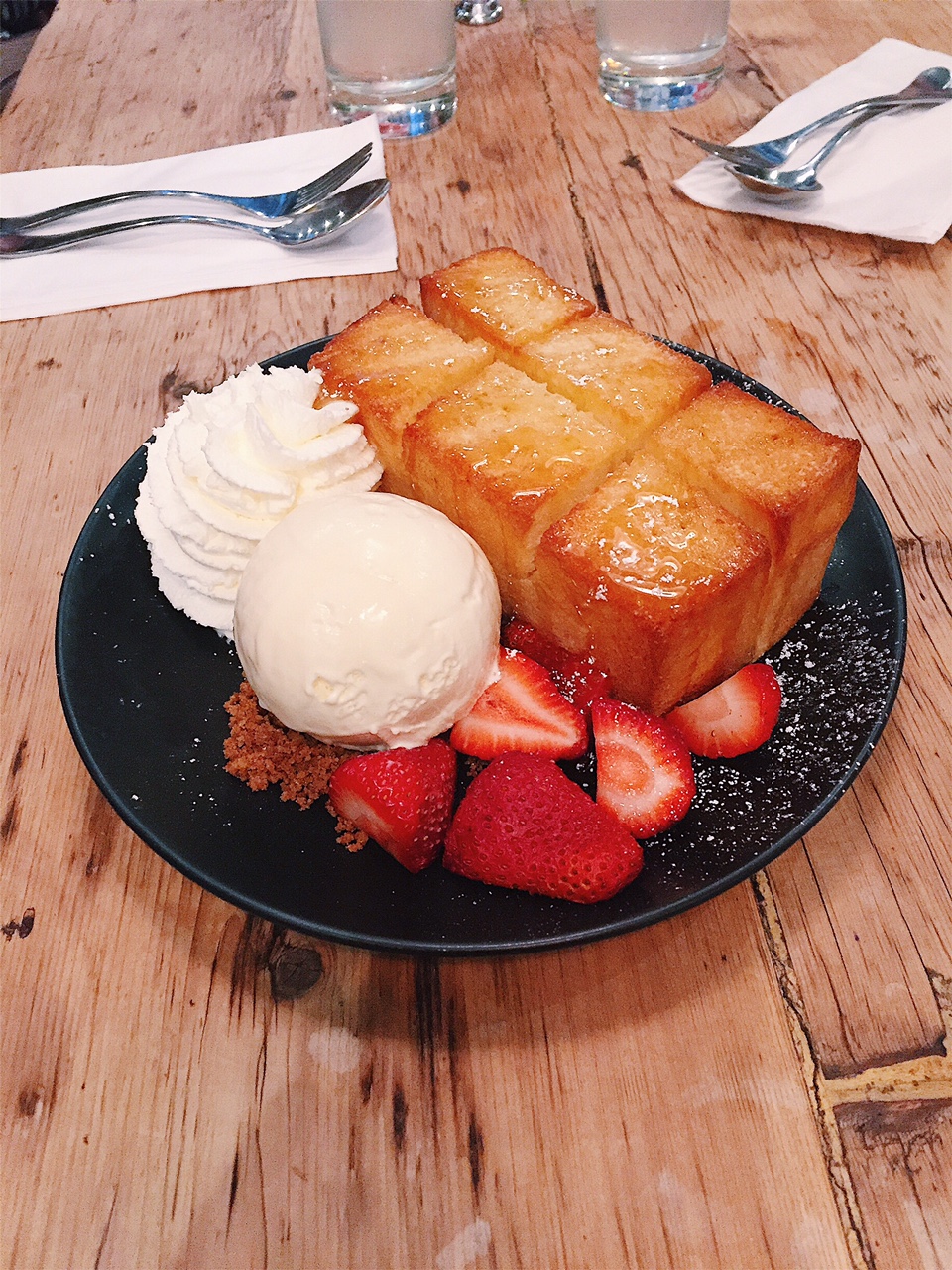 The Golden Toast was reminiscent of the best challah french toast ever, except better. It was accompanied by fresh strawberries, whipped cream, and creamy condensed milk ice cream.

Coming into Spot, I knew I was ordering the Lava cake and the Golden Toast. Those were for sure. But the third dessert we would order was up in the air, and I’m so happy that we landed on the Cookie Camp.

A personal-sized cast iron skillet was home to the gooiest, most velvety marshmallow chocolate chip cookie you ever did see… “Cookie” is actually an understatement. It was really just a slightly crisped outside with warm, chocolatey cookie dough in the middle and pretzels nestled throughout…

it was topped with a heaping scoop of vanilla ice cream, and piping hot chocolate syrup was poured upon it all table-side. (Video coming to Instagram soon…)

City days with my fave ladies are the best!

Thanks for some supremely yummy food, Ippudo and Spot! We looooove youuuuuu!

*The NYC Foodie Bucket List is now, as I posted on my Facebook page, an official list in the form of a Google Doc organized by each area of the city from uptown to downtown and split into places I want to go and places I’ve been! Since my list is always growing, rather than making the list a blog post, II wanted to make this a Google Doc so I can keep adding to it! If you want in on the foodie fun, you can…

… and I’ll be happy to share the doc with you!