I’ve been in love with The Cinnamon Snail since I first encountered this insanely wonderful vegan food truck at Red Bank, New Jersey’s weekly farmer’s market. I’m a true fan who has followed their amazing journey as they blossomed from local vegan secret to the hottest food truck on the East Coast!

After a great run with a fleet of food trucks serving all around NYC, the Cinnamon Snail is not only still providing yummy vegan eats to Jersey, but they also have two brick and mortar locations in NYC at the Pennsy and City Acres Market!

I’ve had the Cinnamon Snail cookbook, Street Vegan, on my shelf since it came out, but I’ve actually never used it before! I think it’s because the long lists of often exotic ingredients intimidated me a bit… But it’s SO worth it. 100%!!! YOU NEED THIS COOKBOOK PEOPLE.

There are likely two items here that you’ve never heard of– seitan and gomasio.

Seitan, as defined by the cookbook’s handy dandy “My Vegan Pantry” glossary section, is

“a traditional Buddhist substitute for meat, made by simmering wheat gluten dough in a flavorful broth. The result is a sliceable vegan protein that has a texture similar to muscle fibers in various meats”

I haven’t cooked with seitan before this recipe, but it’s so easy to make! It’s very versatile, and I love to eat it because it really absorbs the flavor of anything you cook it in. Seitan can definitely be found in stores like Whole Foods, but if your regular old grocery store sells tofu, you’ll probably be able to find it near there!

Gomasio is a sesame based condiment often used in Japanese cooking. And it’s sooooo good.

Let me preface this recipe by stating it was one of the BEST things I have ever made. I’ll often say that I’m more of an eater than a chef… I am obviously obsessed with food, but I don’t consider myself to be an outstanding cook by any means. I definitely can whip up something yummy, but I’m by no means a pro. When I made this meal, I felt like a pro!!! The recipe is super clear and the outcome was exactly as I hoped it would be. It really truly tasted just as good as what they serve on the truck. This sandwich was frickin’ incredible.

There was SO much flavor going on here. I’ll tell you about it from the bottom up.

The slightly spicy tang of the wasabi mayo makes this condiment totally necessary– I almost ditched this component because I’m typically not the biggest mayo fan and I also forgot to get one of the ingredients (the brown rice syrup), but regardless, it really made the sandwich! I loved how its creaminess balanced the other bold textures and flavors of the rest of the elements here. Next, the five-spice sunflower gomasio was absolutely incredible. It’s so smoky and aromatic, giving the sandwich complex layers of flavor. Then, the arugula! These fresh greens brightened up the rich flavors from the seitan and gomasio in a beautiful way. 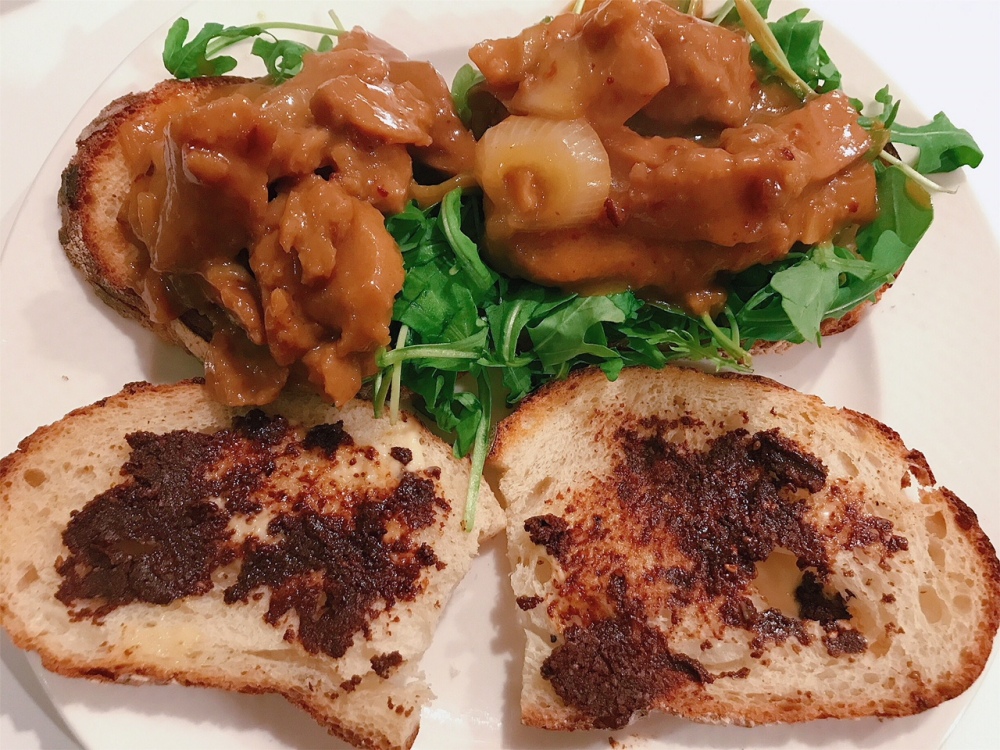 And finally, the main event, the seitan and onions in that wonderful miso teriyaki… This is definitely not your typical takeout teriyaki sauce. It hits you everywhere on your palate;  It’s sweet from the agave (or honey in my case– see in the “tips” section below), spicy from the red pepper flakes, acidic from the rice vinegar, and salty from the tamari. The miso has such a depth of flavor and a bold umami sensation that that makes this sauce so addicting. I love the chewy texture of the seitan in this dish, and along with the sauteéd onions, it soaks up that sensational sauce beautifully. 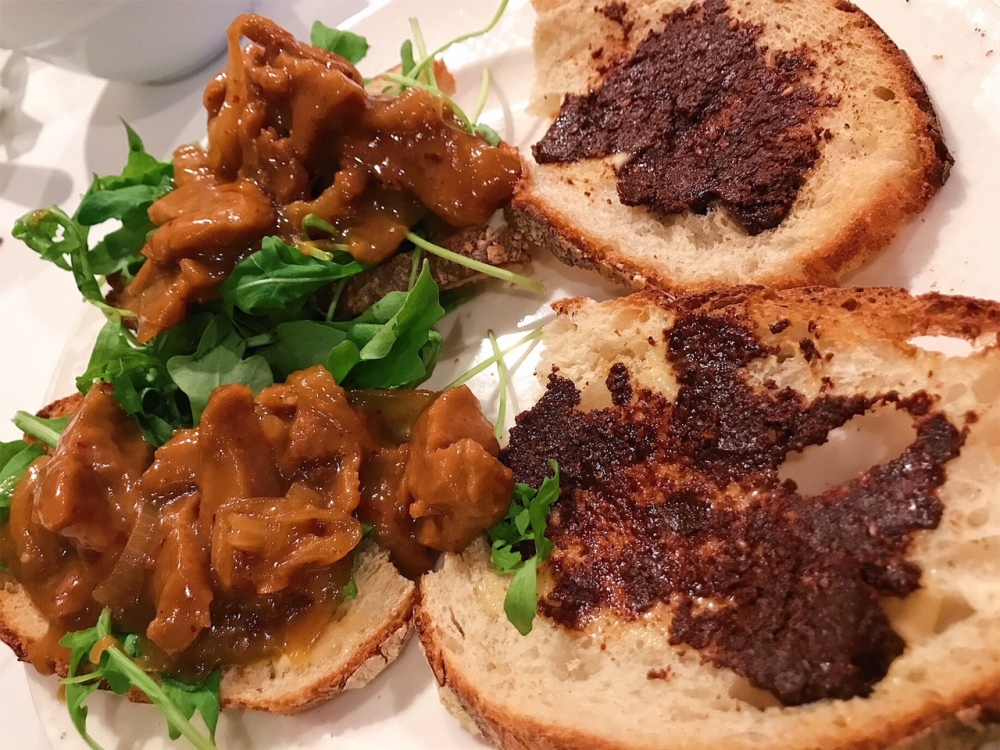 Even my dad, who claims that any veggie-based dish is “too vegan” for him, loved this sandwich, which is a true testament to its deliciousness! This sandwich is most definitely a winner! 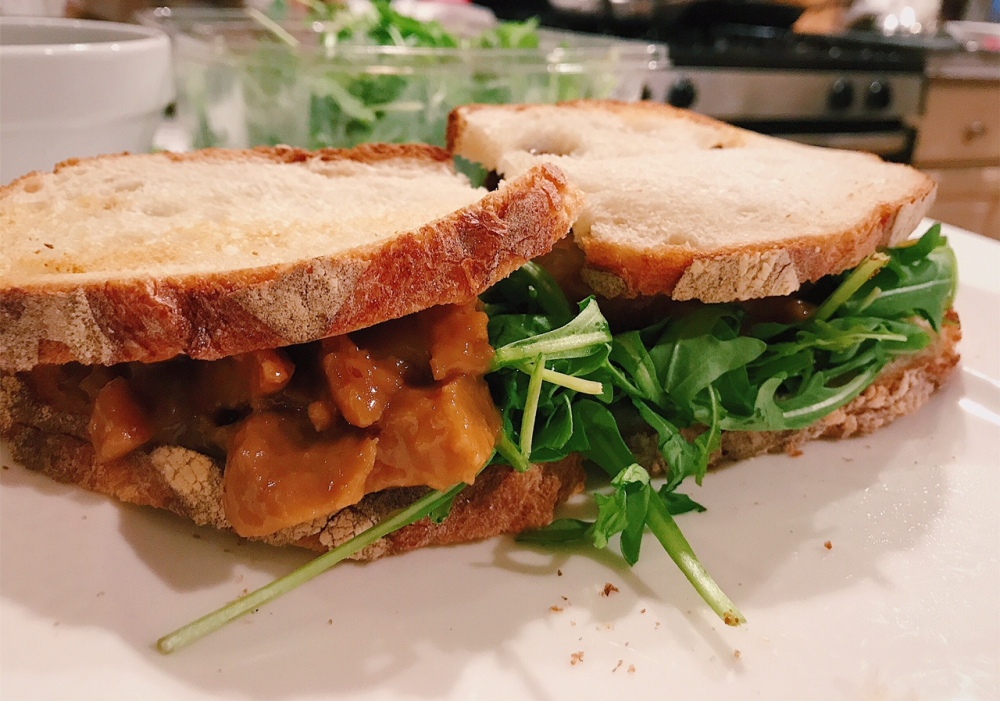 My New Year’s Resolution is to do more cookbook cooking. My foodie parents have a whole beautiful library of cookbooks, and I’ve rarely used them, but I’ve decided the time has come to dust them off and get to work! What kinds of recipes do you want to see in the future??? I’m on a cooking kick and you bet I’m gonna document it. Veggie/healthy recipes? Decadent delights? Quick fixes? Comment below and let me know!