¡¡Holaaaa amigos!! Sorry for my delay in posting, but it’s for a good reason, because as I’m sure you’re aware from my many photos on The Perky Foodie Instagram, I’ve been quite busy lately adventuring in Buenos Aires, Argentina for my semester abroad! What is my life?! I still have to pinch myself every day because I truly can’t believe it’s real. I’m loving this amazing city. Being here and travelling around South America is so different from anything I’ve ever experienced, in the best of ways.

Here are some cool things I’ve done in BA…

But yeah, yeah, I know that you’re really here for the food so… let’s get to it! I promise I’ll post about restaurants soon, but to start, I wanted to give y’all a little recap of the most popular foods here so you can take a little glimpse into what this city’s all about! Here we gooo! 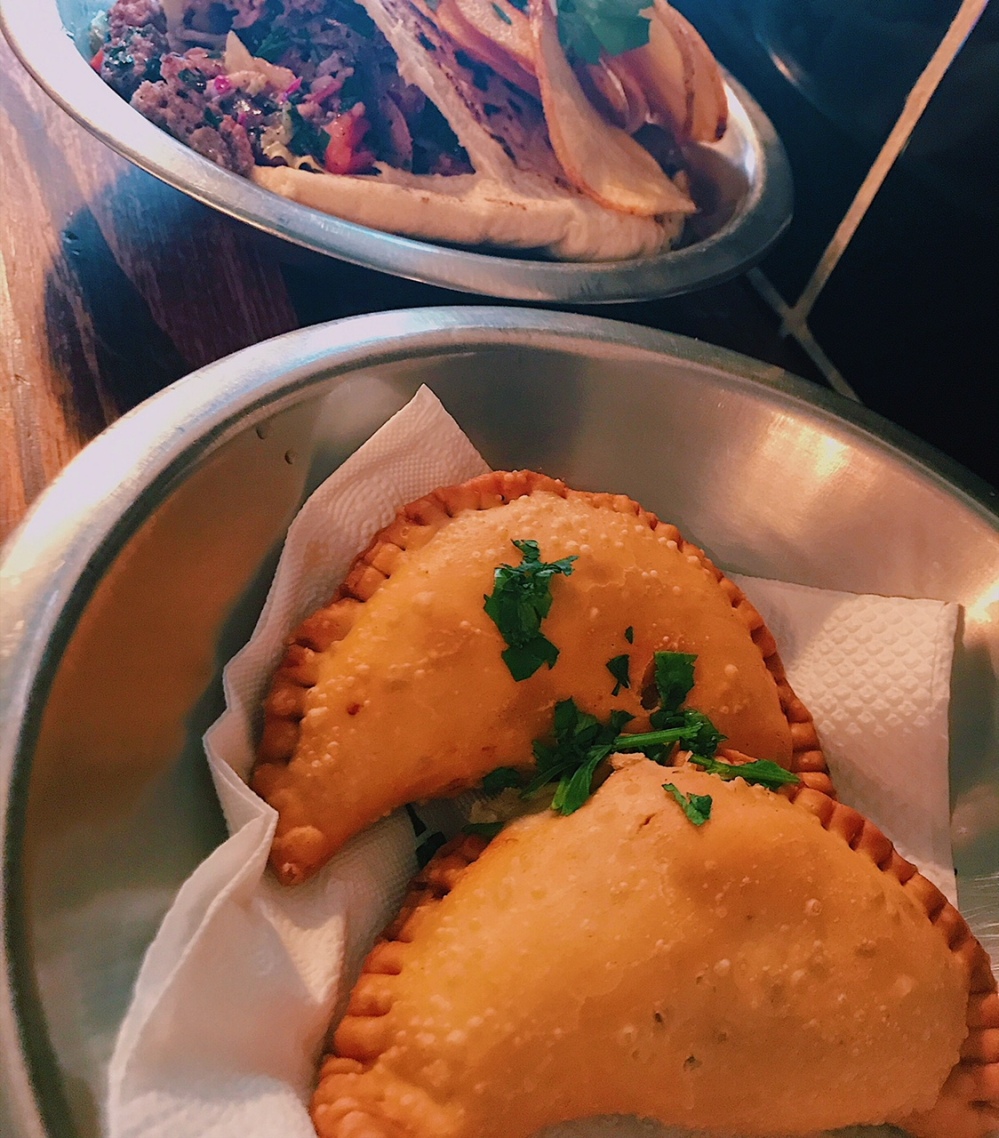 I need to start with this one because it’s undoubtedly the most ubiquitous Argentine snack food/lunch food/midnight snack and everything in between. Empanadas essentially exist as their own food group here. And I can’t get enough. Fried or baked dough comes stuffed with a variety of delectable fillings– my go-to’s are usually carne picante (spicy beef) or onion & cheese– and they’re literally always good. I don’t know how they do it, but every single empanada I’ve had here has been delicious. And that’s a whole lotta empanadas! They’re a miracle food.

Continuing with the theme of fried yummy goodness, milanesa is another wildly popular Argentine fave! It’s usually made with a very thin piece of steak, breaded and fried. Yup. Fried! Steak! This dish may sound Italian to you? That’s because Argentine culture (and food) is largely Italian-inspired because of an influx of Italian immigrants in the late 1800s. 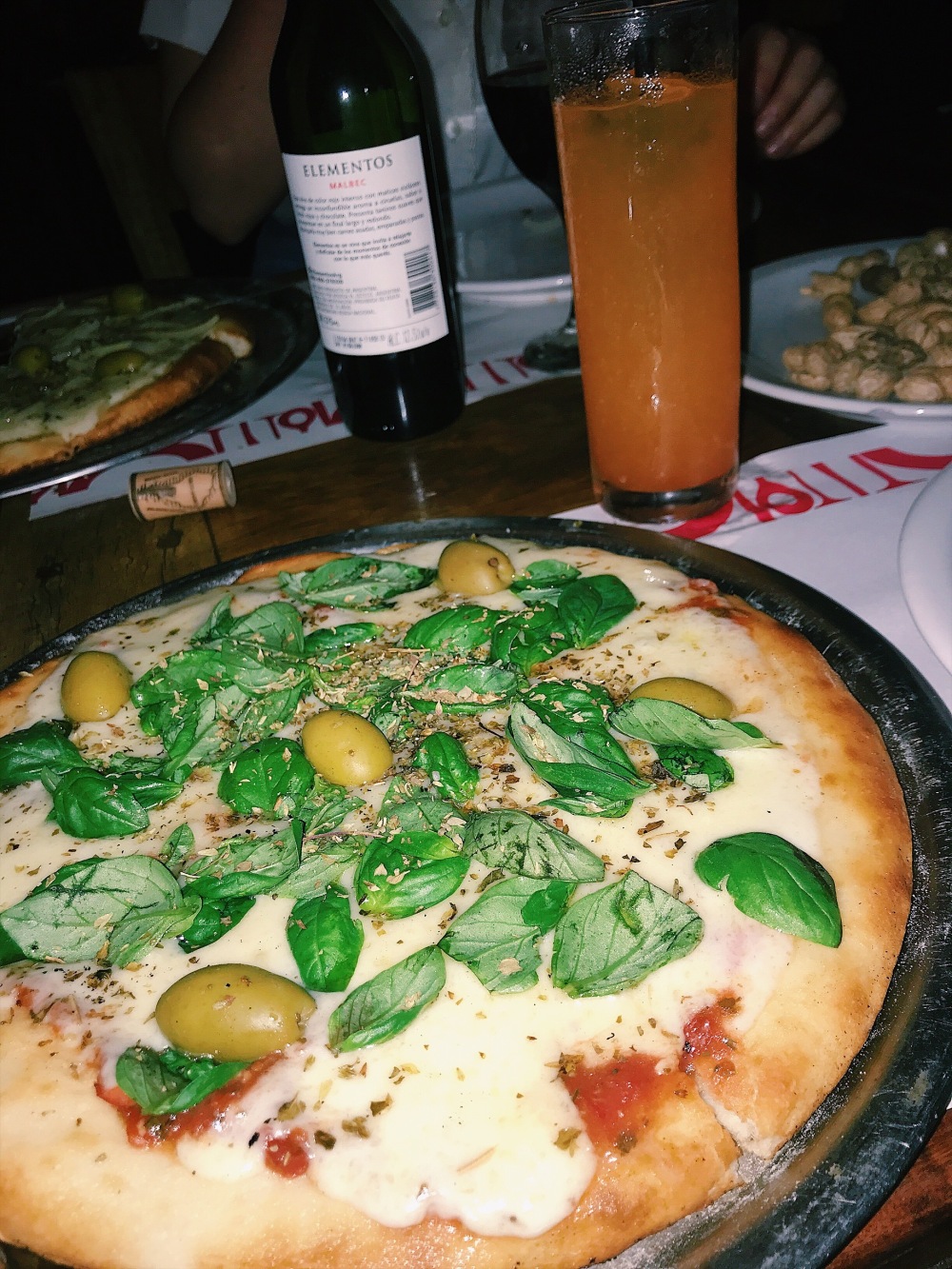 Speaking of Italian…Okay, so the pizza here is… different. If you’re a New York pizza lover like myself, don’t come to Argentina expecting anything like that. It’s just kinda in a category all its own. As I said though, Argentine pizza is kind of its own thing, characterized by a thicker crust, and a LOT of goopy cheese. So much cheese, actually, that you eat the pizza with a FORK AND KNIFE. I know. Blasphemy. But, I happen to love Argentine pizza actually! I’m a big fan of all that cheeeese, and it’s just a really interesting pizza ~experience~ overall, in my scientific opinion. 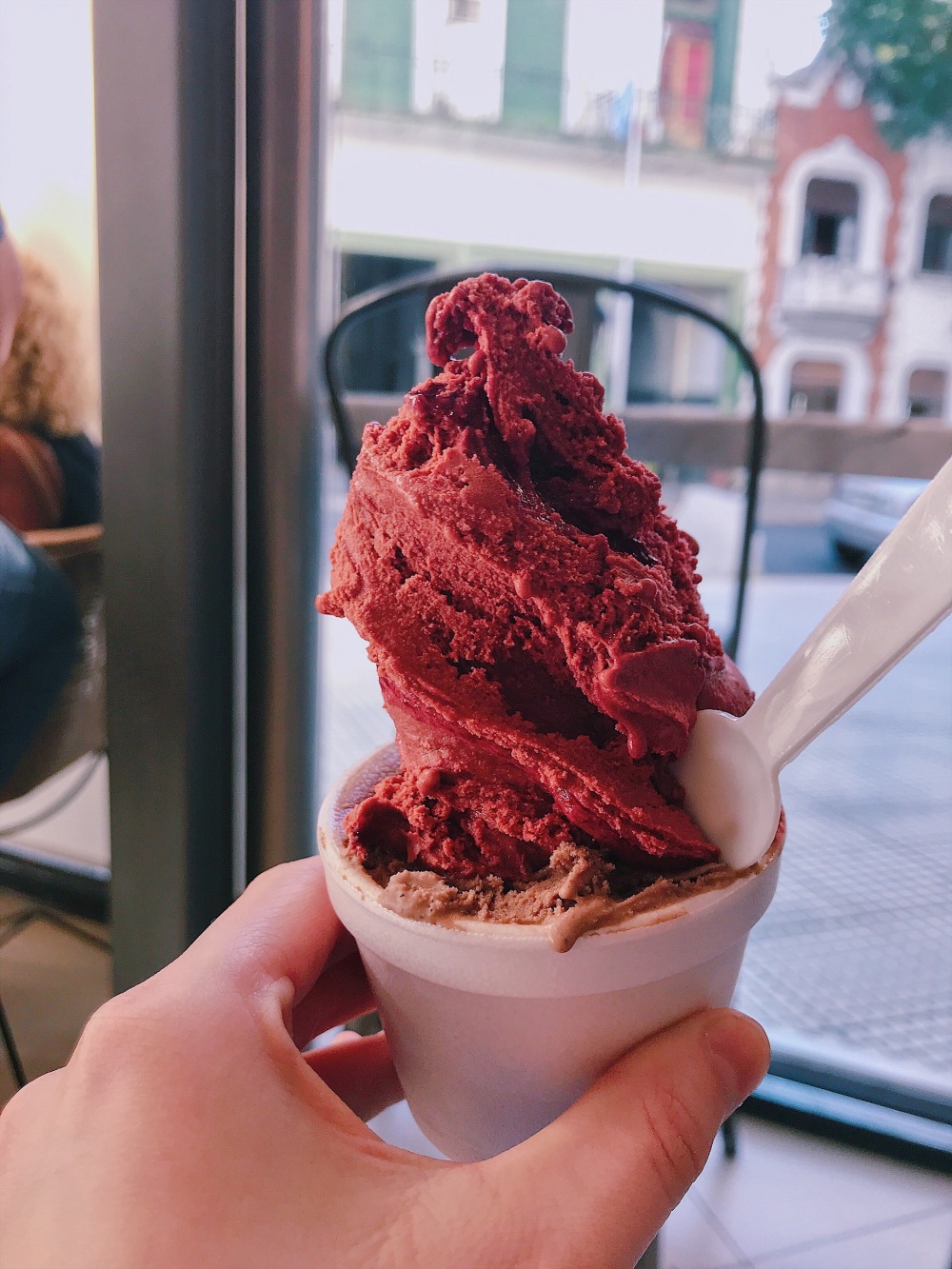 You may be surprised to learn that the food that has actually impressed me the most in Argentina is the ice cream! It’s exceptional. Again inspired by Italy, it’s closer to the consistency of gelato– thicker, richer, and creamier than American ice cream by miles. My favorite flavors to get are Calafate berry, a Patagonian specialty, as well as anything involving dulce de leche. Any given ice cream menu will probably have at least five ice cream flavors revolving around dulce de leche– dulce de leche with flan, dulce de leche granizado (with little bits of chocolate), dulce de leche with brownie bits…a whole lotta dulce. 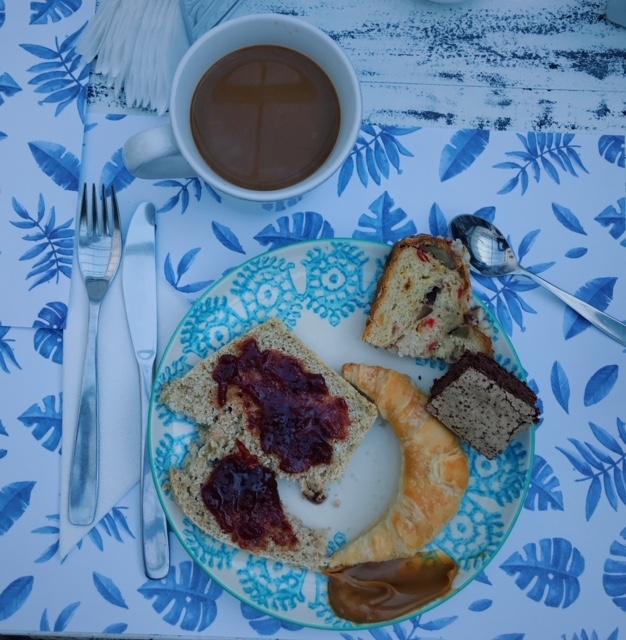 Don’t call it a croissant!!!!!! A typical Argentine breakfast consists of a few of these beauties served with dulce de leche or jam. Medialunas are sometimes made sweetened, with a sticky sugary coating on the outside, and they’re delightful… perfect for dipping in a nice cup of café con leche! The Argentines never eat savory foods in the morning, so eggs are a no-go, sadly.  They keep it light and sweet. As lovely as medialunas are though, are actually not my typical breakfast, since my host mom makes homemade bread (!!) which I eat each day served with jam and fruit! 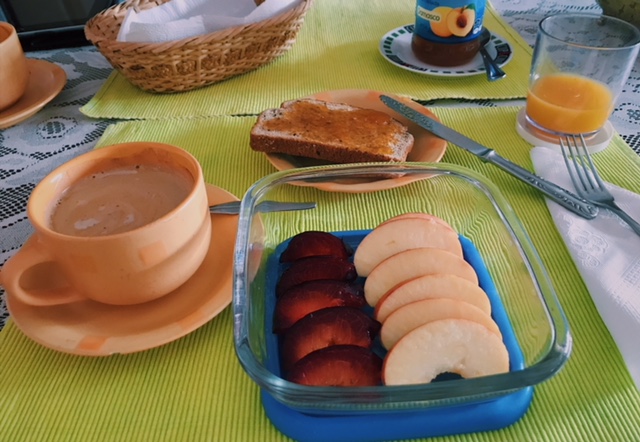 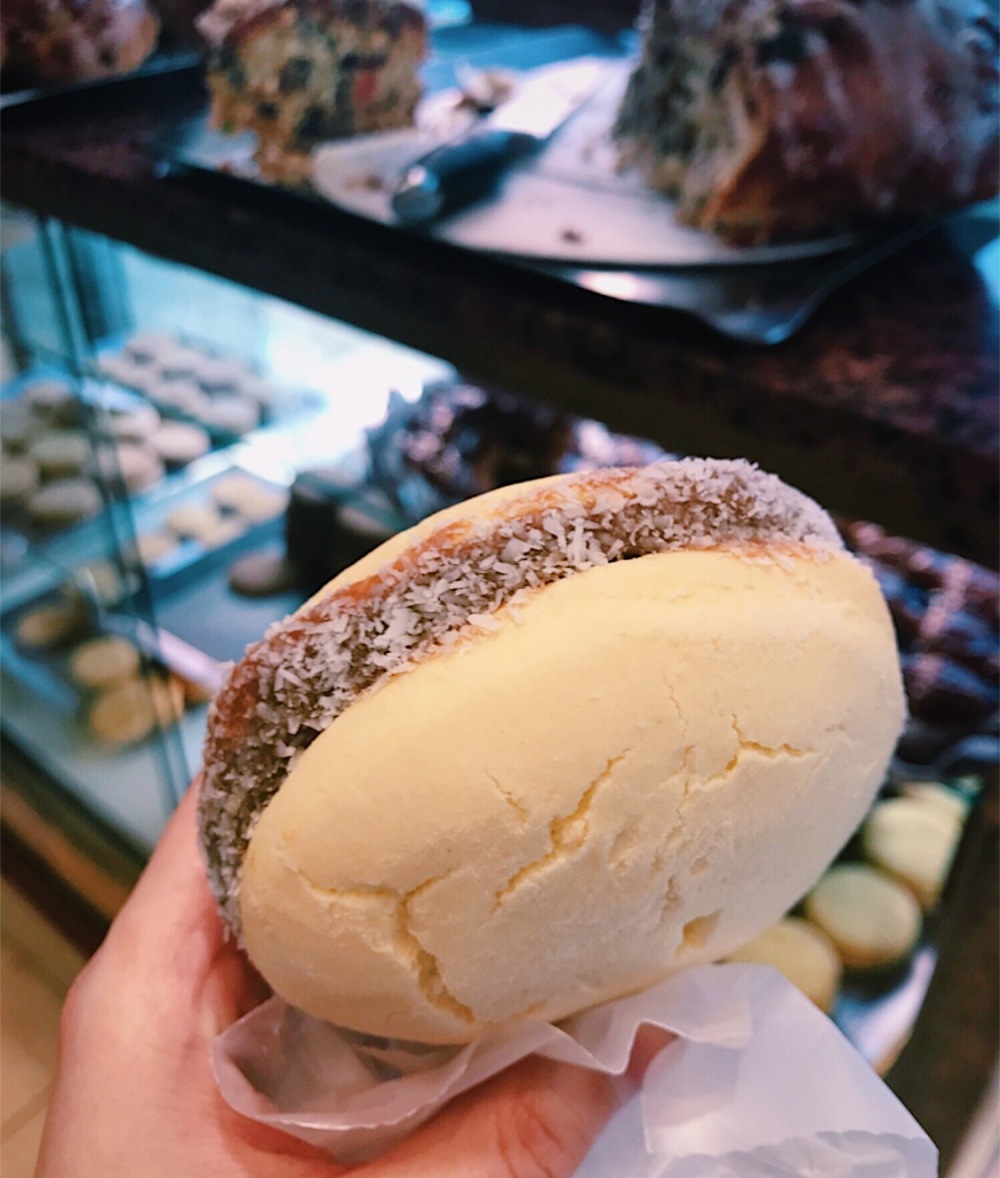 Alfajores are the traditional Argentine cookies that I’ve been eating my weight in since arrival. Two cakey, pillows of cookie heaven are sandwiched and filled it with– you guessed it– dulce! So, you’re probably aware at this point that dulce de leche is the ~thing~ here. Luscious, sweet, dulce de leche, rolled with coconut flakes. Dreamy. That’s the most traditional kind, but they can also be found with chocolate and with varying cookie textures and flavors, and sometimes they’re covered in chocolate or white chocolate! The alfajor pictured is from my favorite bakery, Confiteria Antigua Belgrano, which is dangerously close to my apartment… 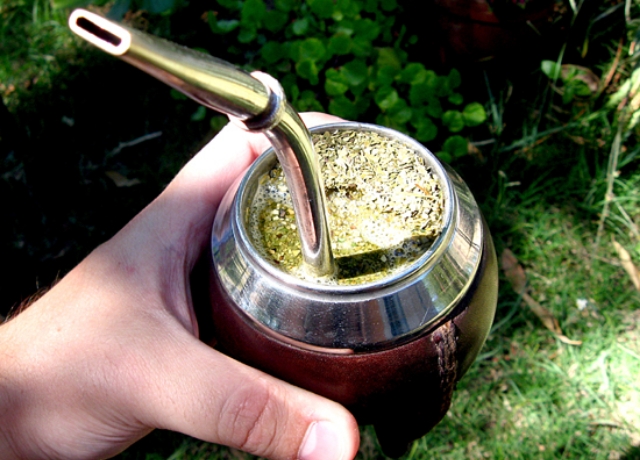 Okay, I have a confession. I’ve been here for two months and have not yet tried mate. It’s kind of a crime. The Argentines are obsessed! It’s a kind of tea, but it’s much more than a tea. Introduced by indigenous tribes, yerba mate is a dried leaf that’s high in caffeine and bitter in flavor. Some people drink it with sugar to cut the bitterness. It’s steeped in hot water, and you drink it out of a little bowl-shaped gourd called a bombilla and sip it through a silver straw. It’s customary to pass the bombilla around and share mate with friends! It’s a lovely tradition, and everywhere you go in BA, there are artisans selling hand-crafted bombillas with gorgeous designs! 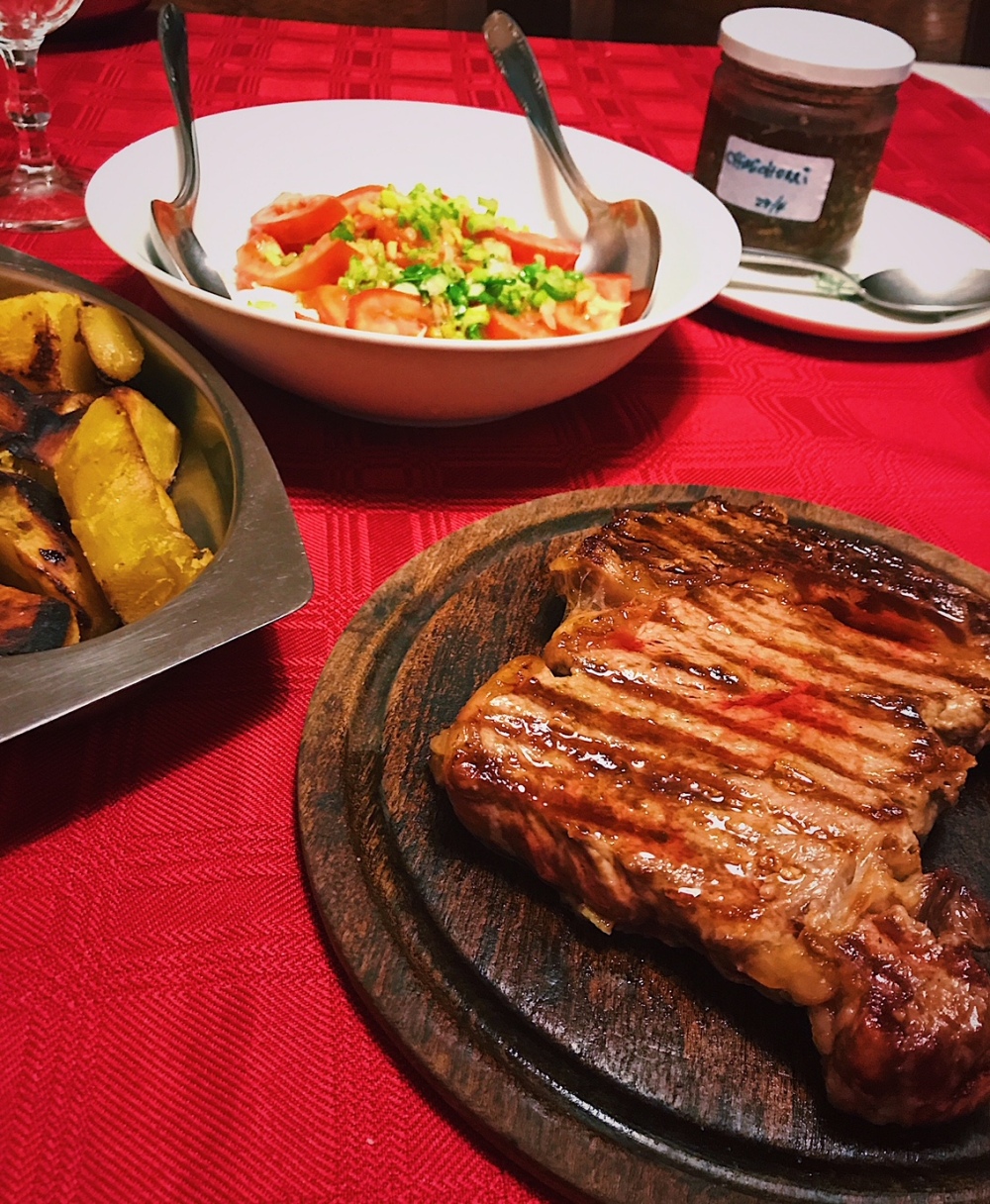 When you think Argentina, what comes to mind? Probably tango, Evita, soccer, and steak. Steak’s the most important. Obviously. Asado, as they call their grilling here, is top notch, and the quality of the meat is exceptional. I actually haven’t been to a parilla (steakhouse) here yet, but the steak pictured was made by my wonderful host mom, who’s an amazing cook! This one is a bife de chorizo, the most popular cut here, which is similar to a sirloin (and actually has nothing to do with chorizo). Steak is cooked lower and slower here, and it makes a huge difference. It’s juicy and flavorful and all things good. Steak is often served with chimichurri, a sauce made from oil and vinegar mixed with lots of garlic and herbs! It’s pretty darn great.

Okay, from these foods I’m making it sound like I eat meat and carbs and nothing else which is only like… an teeny tiny bit true? No, but actually, I promise that’s not all I eat! There actually is a ton of variety here if you seek it out.

There’s an abundance of inspiration from other Latin American countries, which means everything from tacos, to ceviche, to arepas are everywhere!

I live right near the city’s Barrio Chino (Chinatown), a bustling neighborhood with tons to offer from many Asian countries!

Can’t wait to keep updating you on all my foodie finds in this incredible city! I’ve got so much more to see and eat!