Ready for even more yummy foods from my trip to Israel?! Read on…

Our visit to the Arab Market in the city of Akko led to lots of glorious food discoveries! Like hummus! Hummus in Israel is very different from American hummus in the best of ways… Though those little Sabra hummus cups that come with pretzels for dipping were once my go-to study snack, I don’t think I can ever return now that I’ve had real hummus.

I ordered hummus with tehina, a sauce made with sesame paste. The hummus was so creamy, luscious, and silky smooth. The strong sesame flavor created a rich nuttiness brought out even more by lots of garlic and golden olive oil. It was wonderful.

I was also given a fascinating lesson on the  ~art ~  of dipping pita in hummus by my friend Yoav, one of the Israeli soldiers on our trip, who is a self-proclaimed Advanced Hummus Dipper. He informed me that there is a long-standing debate on the proper dipping method: Some choose to dip a straight line through their hummus while others think it is better to move the pita in a circular motion around the perimeter of the bowl. Which way creates a perfect bite?  Which way allows for the optimal hummus experience? I couldn’t decide. Best to leave this one to the pros. Any way you dip it, I’m a fan of this hummus.

Our table also ordered falafel to share! This falafel was everything that falafel should be. So flavorful and fried so it has a delicate crunch on the outside and a tender bite on the inside!

After lunch, I tried a wonderful Arab pastry called Knafeh! Knafeh is a dessert made from melted cheese, topped with very thin, noodle-like shreds of pastry, soaked in sweet rosewater syrup, and topped with chopped pistachios. 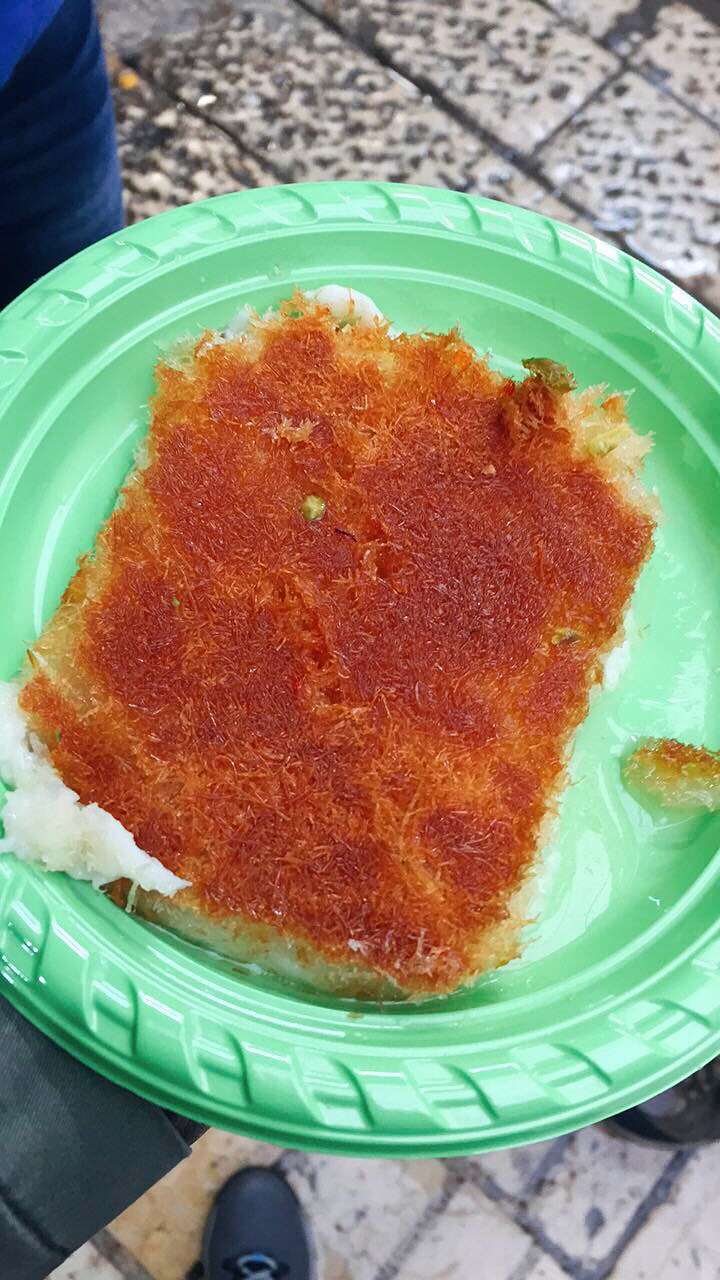 This dessert is so unique and truly delectable. I feel like in American desserts that include cheese, you can’t tell that the cheese is cheese because it’s mixed with so many other things that it’s not really cheese anymore, but this was a definitively cheesy taste, and I loved it! The crispy topping doused in sweet syrup was so rich, and melded beautifully with the flavor of the cheese. America, are you taking notes? 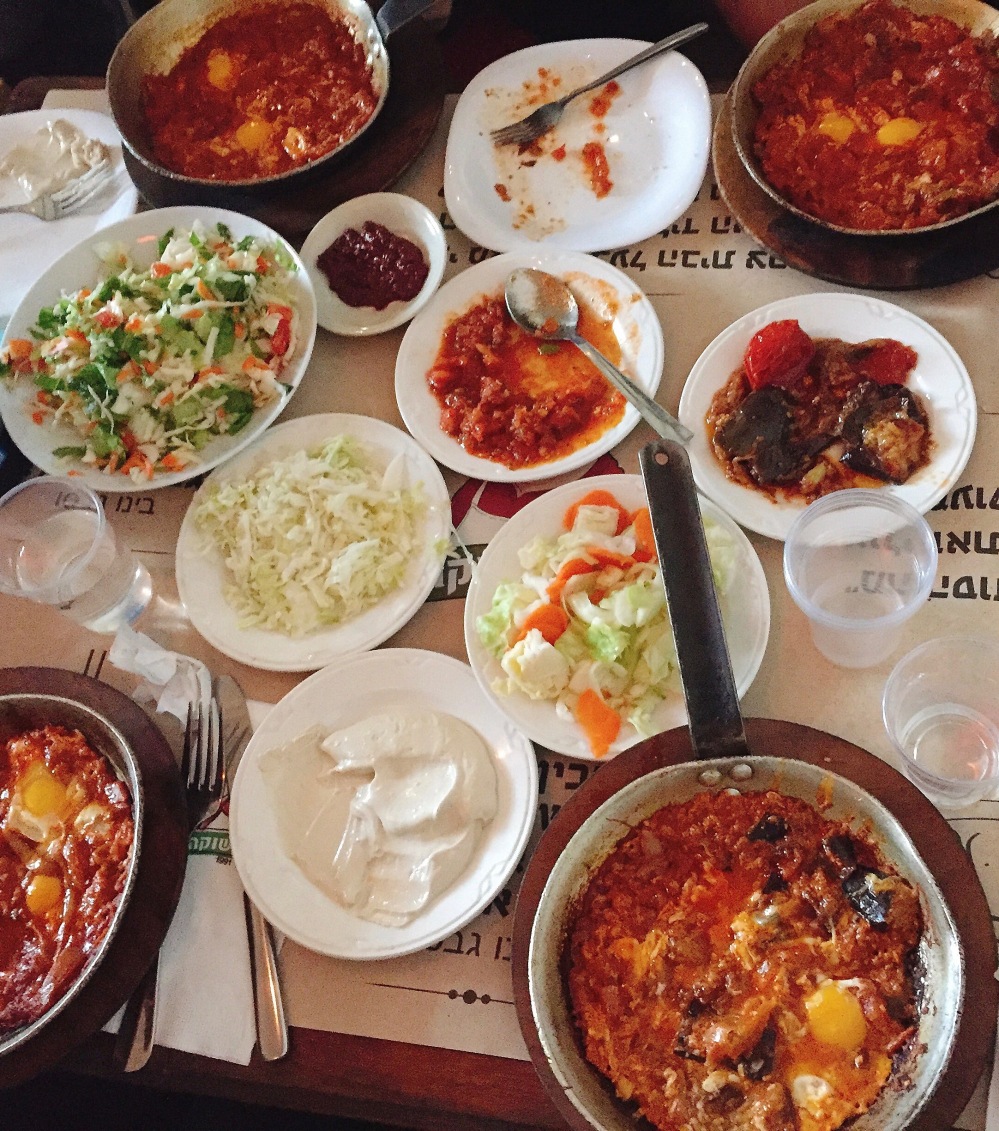 In Jaffa, the oldest part of modern Tel-Aviv, I was thrilled to try one of my favorite Israeli dishes, shakshuka, at one of the most well-known shakshuka eateries around, Dr. Shakshuka! This dish is ideal for breakfast, lunch, or dinner. It’s runny eggs nestled in a bed of slightly spicy tomato sauce. I ordered my shakshuka with eggplant, which was a perfect addition! This shakshuka was served in a sizzling hot pan, and the eggs were just cracked right into the tomato sauce so they cooked while I ate! I dipped lots of bread into the warm, savory tomato sauce and golden egg yolks. It was a sight to behold and a taste to remember. 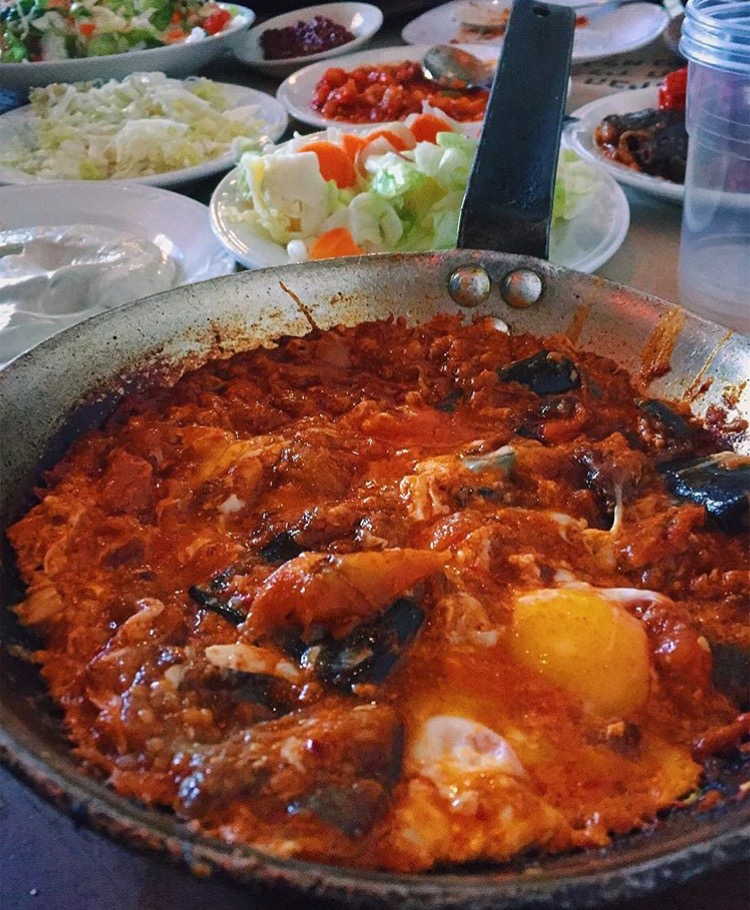 Shockingly, not everything I ate was what one would consider typical Israeli food! Israelis really just do every type of food right.

At a little restaurant in Nahariya that served many different types of food from burgers to pizza, there was an intriguing “from the wok” section of their menu where I found this gem, noodles with Malaysian salmon! It was so so good. Lo mein noodles, cabbage, carrots, and onions, sweet potatoes, and salmon were cooked in a sweet teriyaki sauce. Delicious!

Then, in Tel-Aviv, I went to a very trendy Italian restaurant where I ordered gnocchi in a pesto cream sauce flavored with truffle oil and topped with tomatoes and ricotta cheese!

It was so rich and creamy… Look how gorgeous… 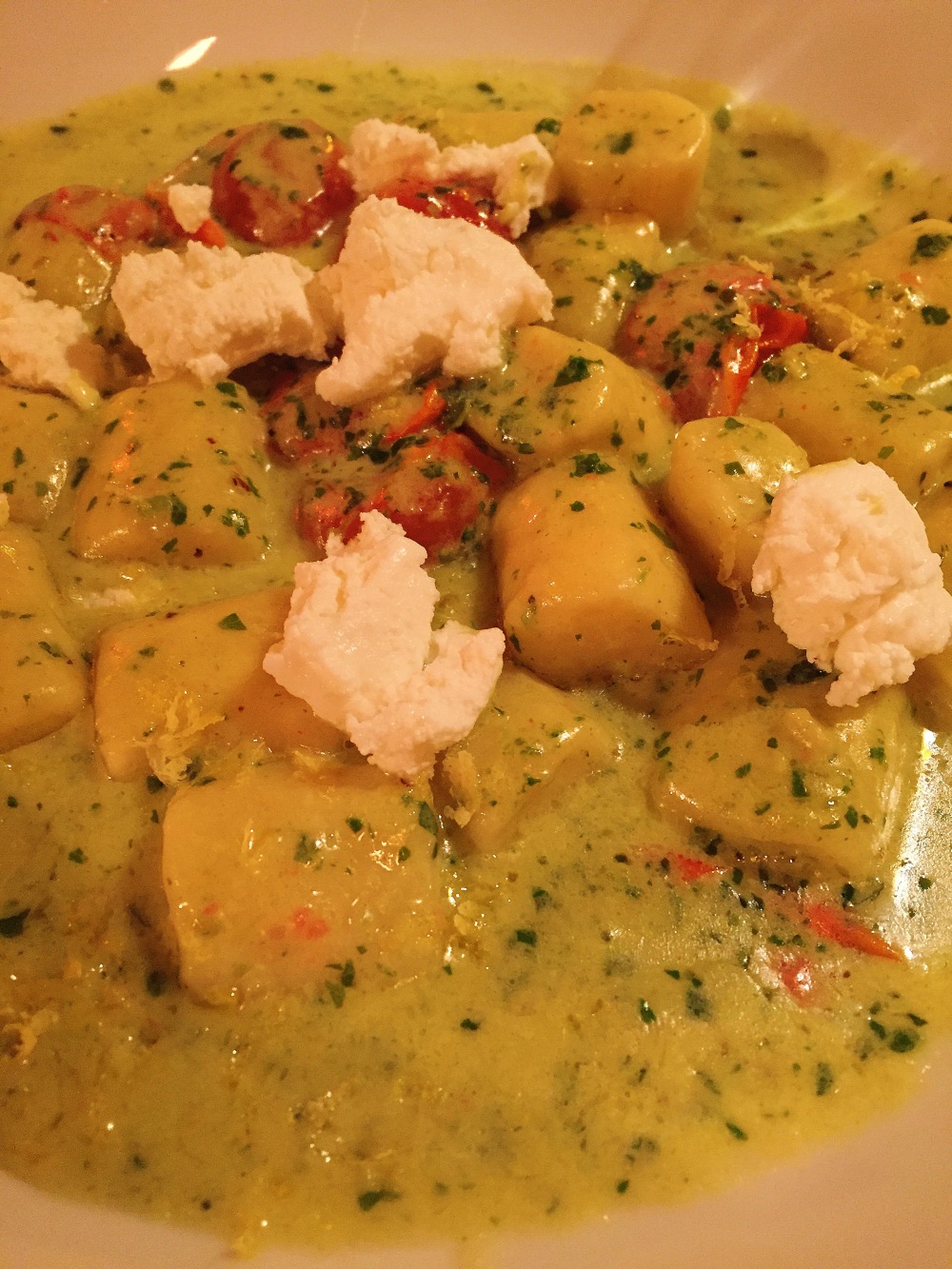 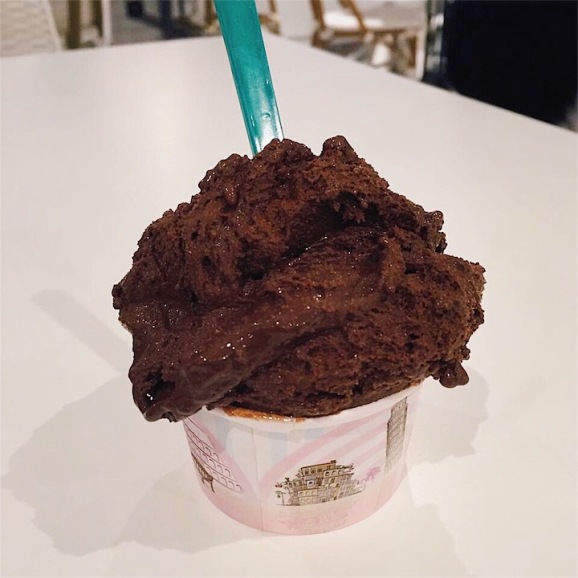 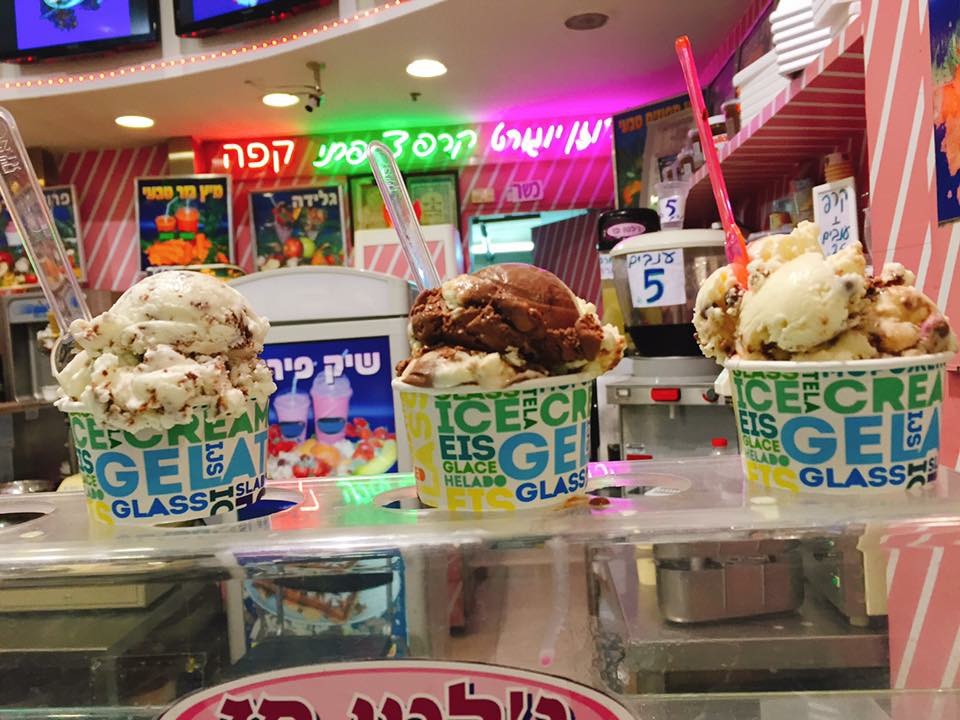 Kinder Egg Chocolate (mine is the one in the center)

Jerusalem was definitely my favorite part of Israel. It’s such a beautiful city with so much history and life in every cobblestone, street, and building. While walking through the Old City, I tried a Jerusalem bagel! As you can see from the picture, a Jerusalem bagel is very different from an American bagel. The shape, for one, is much longer, but the taste is different as well! It has a much lighter texture and a slightly smoky flavor. You’re supposed to dip it in za’atar, which is a made from a blend of herbs and crushed nuts, but I didn’t find this out until we had walked past the bread stand, so I missed out on that, but will definitely have to try it next time!

Then, we headed to Mahane Yehuda Market, often referred to as “The Shuk”. It was sensory overload– everyone shouting and pushing, foods of every kind, smells of spices vendors were scooping out of burlap bags, music being played on the street, and more. We went on a Friday around noon, the busiest time to be at the market, because everyone is scrambling to get lots of food for Shabbat and for the rest of the weekend. It was also still Chanukah, and New Year’s Eve was rapidly approaching, so the market was a total zoo.

I learned early on in this trip that it’s always best to follow the Israelis to find the best food, so of course I had to follow one of my lovely trip leaders, Liron, a Jerusalem local! A bunch of us tried going to Liron’s favorite restaurant known for their kubbeh, a beet soup with meat-filled dumplings, but the line was sooo long and we only had an hour! I was going to wait it out with Liron, but we really didn’t have time, so she decided to take me on a little adventure through the market to sample some of the delicious foods the market had to offer!

First, we had burekas. These were definitely the best burekas I’ve had. The layered pastry was so  flaky and buttery, sprinkled with sesame seeds, and filled with an almost custard-like cheese. Yumm..

Then, we sampled green olives with hot red pepper, sage, and fresh lemon wedges. So spicy and the zing of lemon was a perfect touch! 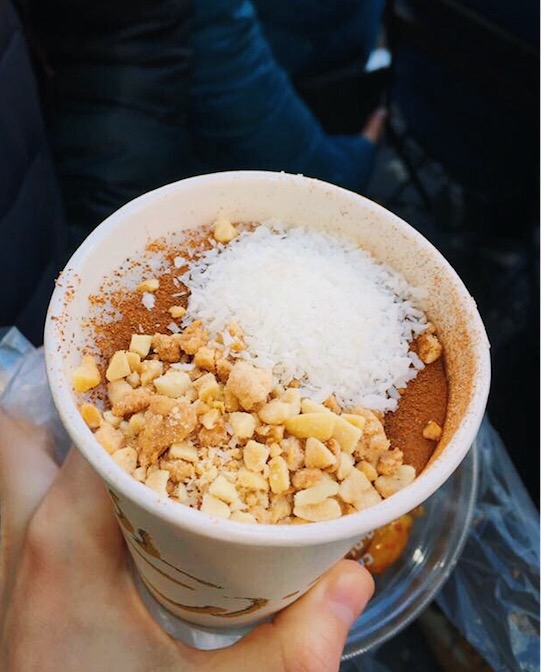 Next was sachlav! This warm drink is made from milk thickened with cornstarch and topped with crushed nuts, sweet coconut flakes, and a blend of warm spices like cinnamon and nutmeg. If you’ve ever had horchata, which is a traditional Mexican drink, sachlav has a very similar flavor! The texture is like a thin pudding or a thick drink, and you stir the toppings in and eat it with a spoon. It’s sweet but not too sweet and just makes you feel warm and happy all over!

I had been meaning to try chocolate rugelach from Marzipan Bakery, a famous spot in the shuk while I was there but just didn’t have time, so my friend Allison kindly let me try one of hers on the bus ride back to our hotel! It was still warm, the rolled pastry glistened, the chocolate was sticky, gooey, and oh so sweet, and the whole thing just melted in my mouth… It was heavenly.

My memories from magical Israel will stay with me forever, and the wonderful food I ate there will certainly continue to inspire me. Until next time, I’ll be dreaming of cucumbers and knafa and shawarma and all the other glorious food I stuffed myself with on this amazing trip. Israel, I’ll be back one day!